.swf ("Small Web Format") is an Adobe Flash file format. It was widely used by the Club Penguin Team when designing content for the desktop version of Club Penguin, such as rooms, clothing, penguins, minigames, etc.

Just like any other file, each SWF file had its own file name (ending with .swf), as well as URL path in Club Penguin's website. SWFs also often had a unique ID or name as part of the path it is under.

In the case of IDs, represented as numerical values, they were used for things such as the various types of items (such as clothing, furniture, etc.), postcards, and music. Each of these had its own series of IDs — each corresponded to a single object of that type. IDs were used due to the number of these often being in the hundreds or even thousands, and having a unique SWF name for each would be inconvenient for coding.

In the case of names, these were used for things such as rooms and catalogs. The name would often be a short, sometimes alternate name. While already short names were usually the same (as a room example, the SWF name for the Dock was "dock"), things with longer names would use shorter ones (the SWF name for the Dojo Courtyard was "dojoext"). Describing the file in its name, rather than attaching to it an ID, could be used for easily embedding files using ActionScript, without the need to look up for the ID.

A SWF of Ice Fishing

A SWF of the book Lime Green Dojo Clean

A SWF of Catchin' Waves 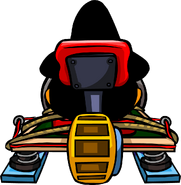 A SWF of Test Run from Mission 2 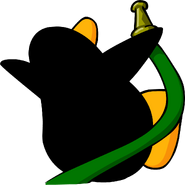 A SWF of Puffle Soaker

A SWF of the August 2007 Igloo Upgrades

A SWF of Card-Jitsu Water