2 Coin Bubbles was a medium difficulty stamp in Club Penguin, only available to be obtained by members. In order to obtain this stamp, the player had to find two coin bubbles in the sea levels of Puffle Rescue.

To find the second coin bag, the player had to first obtained the first coin bag in a bubble in level 7. In level 8, above where the second Black Puffle is rescued, there would be a bubble in the shape of an arrow. The player would need to land on it, and it would then keep swimming in the direction it pointed to. The player would need to keep doing this until he or she reached the second coin bag in the bubble. Popping the bubble would cause the coin bag to automatically be obtained.

Note: If the player had two or three black puffles with him/her, the player would be too heavy to reach the next arrow. 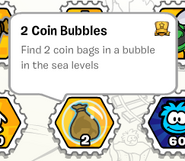 SWFEdit
Retrieved from "https://clubpenguin.fandom.com/wiki/2_Coin_Bubbles_stamp?oldid=1871962"
Community content is available under CC-BY-SA unless otherwise noted.