The 5th Anniversary Party was a party in Club Penguin. It was supposed to be one day only, but started a day early, and ended a day late. It was also first confirmed in a post on the What's New Blog.[1] 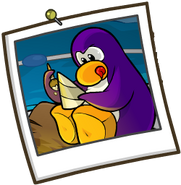 The log in screen for the 5th Year Anniversary Party

A sneak peek from the What's New Blog.[3]

The Party Hats on a rack on the wall