The Adventure Party was a party in Club Penguin. It ran from June 12, 2009, to June 16, 2009. The Party Room was the Tree House. The various plants in the party were gifts from Rockhopper.

The Scavenger Hunt was like the Easter Egg Hunts, but instead of colored eggs, players had to find plants and animals.

The first login screen of the party

The second login screen of the party 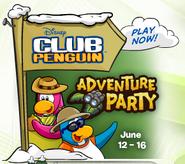 The following are variants of the Forest. The colors of the plants changed color depending on what color the majority of penguins in the room were.

A banner for the party