Alaska is a brave female explorer seen as a main character in the Stage play "Quest for the Golden Puffle". A peach penguin, she wears Alaska's Explorer Hat and the Sienna Explorer Outfit, and carries a Lasso. She is by far braver than her brother, Yukon, but is slightly more arrogant and does not think about the dangers that might lie in the places she explores.

"Bold. Fearless. Alaska and danger go together like squid and pizza. Nothing can stop her quest for the rarest puffles.

She likes to leap before she looks, but somehow always land on her feet. " 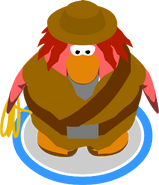 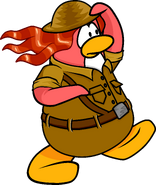 Alaska and Yukon on a wallpaper