The Amethyst was a rare pin in Club Penguin. All players could obtain it by digging up four pieces of it from the dirt pit in the Cave Mine during the Cave Expedition, using either a Hard Hat or a Snow Shovel. 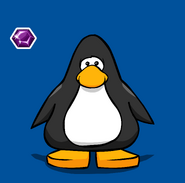 As seen in a Stamp Book