An Agent's Work Is Never Done

An Agent's Work is Never Done is the thirteenth and final mission in Club Penguin: Elite Penguin Force. In this mission, after the island is saved from the rampaging Test Robots, and everything is seemingly peaceful, a powerful new enemy appears, threatening the island once more.

Although not referred to as such in-game, this mission and the previous two retroactively comprise "Operation: Robotomy", as later mentioned in System Defender, Top Trumps cards, and others.

After having stopped the robots and returning peace to the island, the other EPF agents decide to congratulate the player. Starting out in the Command Room, the player must go to the Plaza, and then use the Super-Power Flashlight to enter the Stage, which is dark. Inside, the other agents (Gary and the Director not included) surprise the player. Afterwards, a set of mock credits are shown, labeling in-game characters as having developed the game. After several slides, the screen "cracks". The credits close, and a loud crash is heard while the room shakes.

The other agents question what happened, while the player receives a call on the Spy Gadget. Its from The Director, who calls an island-wide emergency. They mention surveillance in HQ is down and the Elite Puffles are missing, as well as Gary. The Director then teleports the player and other agents back to HQ. Jet Pack Guy and Rookie try and fix the I.S.E.E.U., while PH tries using her whistle to call the elite puffles. If the player talks to PH, she can be asked if she found anything at the Dojo, and she says she saw a "very, very, VERY big" hole in the wall. The player can also enter the Command Room and speak with the Director, who mentions no leads have been found. Dot is investigating the Gadget Room, which has a big hole in the wall, and if she is talked to, informs the player she found a large oil can near the hole. The player thinks this means there is another robot, but Dot says Gary insisted he only built three. The player decides to use the Snow Trekker to investigate the wilderness.

After playing the minigame, the player arrives at a cave in the wilderness that was visited in a previous mission, but now has a large hole in the wall. The player enters, realizes it must be a hideout, then notices a giant robot, which has the elite puffles trapped and Gary in a hole on its head. Gary exclaims the Test Robots built a robot from sketches from his notebook. The robot places a glass dome on its head, trapping Gary. The robot announces it is named the "Ultimate Proto-Bot 10000", and it is a "next generation test robot". It activates its "Super Intelligence Component", while the player demands for the Proto-Bot to return Gary. The Proto-Bot starts an "Upgrade Scavenger Hunt Sequence", and proceeds to attack the Night Club, searching for a "turntable upgrade". Dot arrives, questioning the Proto-Bot's motives, and the player suggests its trying to steal things to use to upgrade itself. The player must head inside the Gift Shop to stop it. Inside, the manager is panicking because he saw a robot on the roof while he was cleaning out the gutters. On the roof, the Proto-Bot's head is close by. The player can use the Mechano-Duster from the Spy Gadget to tickle its "nose", which makes it sneeze and launch backwards. The Proto-Bot loses its balance, causing the "Puffle Containment Chamber" to briefly open, allowing Blast to escape. Once outside, Dot tells the player the Proto-Bot fled to the Dock, and that she is trying to help penguins to safety and have them stay away from the chaos. If talked to again, she also remarks many penguins think the Proto-Bot is part of a party.

At the Dock, the Proto-Bot is trying to use the Hydro Hopper boat for parts. Blast can be launched at the Proto-Bot, which tilts over once more and falls in the water, allowing Loop to escape. She must then be interacted with to retrieve her. The robot flies away to the Ski Village. There, the Proto-Bot is using its "Spin Dry" mechanism to remove water from its system, but Gary says this is making him sick. Rookie appears with a rubber duck, exclaiming he will save Gary with a secret gadget. Gary asks what it is, and Rookie says he found it in the Gadget Room. Loop can be used to tie up the robot, again losing its balance, saving Flare, who is sick from the spinning. The Proto-Bot breaks the lasso and moves to the Beach to attack the Lighthouse, to get a "Puffle Capture Upgrade" for recapturing the elite puffles. If the player talks to Gary, he says he believes the Proto-Bot thinks it can acquire the puffle's abilities by trapping them inside. Flare can be used to weld the wheels of the mine cart base of Proto-Bot, preventing it from moving. This causes it to lose balance once more, releasing Flit. No longer able to move on the ground, the Proto-Bot uses the stolen boiler on its back as a jetpack to fly away to escape.

Inside the Lighthouse, rubble, glass shards, and various objects such as a life ring, buoy, and barrel are scattered across the floor. Upstairs at the Beacon, the Proto-Bot is flying nearby, this time trying to take the Beacon's light. An anvil suspended by a balloon is floating above the Proto-Bot, and Flit is able to pop the balloon, hitting the robot, and freeing Bouncer. The Proto-Bot believes the area to be too high of a risk for it, and flies away. The player gives chase on a jet pack, in the form of Jet Pack Adventure, encountering the robot multiple times, it flying away each time. It eventually reaches the peak of the Tallest Mountain, but does not notice the player. This allows for an opportunity to throw snowballs at the Proto-Bot's boiler, putting out the flames and preventing it from flying, causing it to crash into the snow, and setting Chirp free. The Proto-Bot struggles in the snow, giving a chance to have Chirp shatter the glass on its body, freeing Pop, who can blow a bubble to save Gary. He floats down and pops the bubble with a pen, and tells that player that without its "intelligence", the Proto-Bot is unsure of what to do, and tells the player to use the Robotomy. In a last ditch effort to save itself, the Proto-Bot puts up some firewalls to protect its systems. Navigating the battery through all three firewalls deactivates the Proto-Bot, and it powers down.

Gary exclaims that the Proto-Bot is finally defeated, and a sequence is shown. The Director congratulates the player, saying the EPF is lucky to have them, and that rebuilding has begun to repair the damage from the robots, and the stolen objects are being returned to their places. The citizens are happy, and everything is returning to normal. The Director proceeds to promote the player to Unbelievably Over-the-Top High Level Clearance for their efforts. The mission is over, and the real credits then play.

If this mission is played in multi-player with the Command Coach, there is a hidden crate on the Gift Shop Rooftop containing the Knight Helmet. Both players obtain the item when found.

While attempting to stop the Proto-Bot, using the wrong puffle for a situation prompts a unique message for each one. Cells with a dark gray background do not have failure messages because that puffle is not available at that point, while ones with a red background do not have failure messages because they are correct solution. "PB" is what the Proto-Bot says, "P" is what the player says, and "G" is what Gary says.

While the Proto-Bot is flying above the Tallest Mountain scanning for upgrades, all options except Bouncer result in the player thinking "This doesn't seem right. One wrong move now and the Ultimate Proto-Bot will fly away."

While the Proto-Bot is stuck in the snow on the Tallest Mountain, all puffles except Chrip result in the Proto-Bot saying "Agent Detected. Running evasive maneuver one zero two." and the player thinking "I can't even get close with the puffles. That Ultimate Proto-Bot is not letting its guard down any more." Attempting to use the Mechano Duster has the player think "It's too dangerous to use get close to the Ultimate Proto-Bot." Using the Robotomy has no reaction.

Once Gary is freed, all puffles result in the player thinking "The Ultimate Proto-Bot access panel is exposed. Now is not time for puffle abilities." Attempting to use the or Mechano Duster or Super Power Flashlight (the only time attempting to use the flashlight on a robot results in any sort of reaction) has the player think "This won't work. There has to be another way."

This mission has many unused dialog strings and sprites, suggesting it was originally meant to be a fairly longer mission. Almost every scene in the mission contains a few cut lines of dialog. Some significant cut content includes:

The other agents surprising the player

The Elite Penguin Force as the developers

The Director as project manager

Aunt Arctic for design and story

Chirp for art and animation

The Test Robots as game testers

Pop and the DJ Penguin for sound and music

The fake credits being shattered, as result of the crash

The agents surprised and confused by the crash

Jet Pack Guy and Rookie attempting to fix the ISEEU

Dot confused about by a potential fourth robot

The Test Bots and a hole in the Gadget Room

A hole in a cave in the wilderness

The player surprised by the robot

The Proto-Bot with Gary and the puffles captured

The Proto-Bot attacking the Night Club for a "turnable upgrade"

Proto-Bot visible from the roof

Dot talking with the player about the Proto-Bot

Proto-Bot flying away after being damaged by water

Rookie attempting to save Gary with a rubber duck gadget

Proto-Bot attacking the Lighthouse for a "net upgrade"

Damage inside the Lighthouse

Proto-Bot hit with an anvil

Chasing the Proto-Bot in the skies

Proto-Bot crashed in the snow

Proto-Bot attempting to escape the snow

Gary instructing the player to use the Robotomy gadget

Proto-Bot cornered, having lost Gary and the puffles

The Director telling the player about the repair efforts

The island returning to normal

The end of the real credits

Proto-Bot on the map, showing where it is attacking

A hole in the Dojo, which can be seen during the time the player has access to the map

The hole in the Puffle Training Room

Penguins at the Plaza, having noticed the Proto-Bot pass by

The cabinet in the HQ without the rubber duck 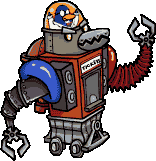 Small sprite of Proto-Bot, which would have appeared during the initial encounter with it in the cave

Sprite of Proto-Bot attacking the Beacon (several separate sprites, but combined into one for this image)