Animal is seen by many to be loud and destructive, sometimes too much for his own good. Because of this, he had to be enlisted in an anger management class before the reunion of the Muppets. Animal is obsessed with drums and always jumps at the chance to use them. Animal's vocabulary is generally limited to guttural shouts and monosyllabic grunts, often repeating a few simple phrases. During performances, Animal is usually chained to the drum set, as his musical outbursts are extremely violent.

Animal appears in the Day 7 act of the Muppets World Tour on March 26. He is stationed in Brazil (the Cove). Animal teaches penguins to master the art of drumming. You equip the Animal's Drum Sticks and complete the performance, where Animal then gives you the Sambista.

In #WaddleOn with The Muppets, Animal is a minor character. He is seen flying the airplane Kermit and Fozzie use to find the Golden Anvil thief, but he ends up not being a very good pilot. The passengers do end up landing safely, however (though the video says not to ask how). 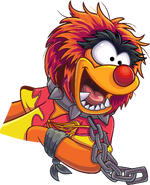 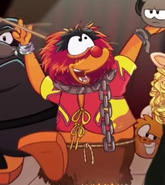 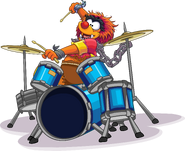 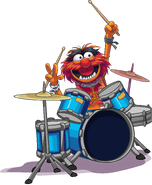