Anvils + More was a series of stores and workshops, located at the Mall. As its name suggests, it sold anvils and more. It was first seen at the School & Skate Party, then later at the Merry Walrus Party. As of June 4, 2015, it could be seen permanently at the Mall. 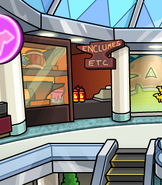 At the School & Skate Party 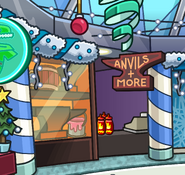 At the Merry Walrus Party 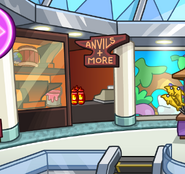 Retrieved from "https://clubpenguin.fandom.com/wiki/Anvils_%2B_More?oldid=1872129"
Community content is available under CC-BY-SA unless otherwise noted.