For the machine featured in this game, see Aqua Grabber 3000. For the similar game from Herbert's Revenge that utilized the same machine, see Aqua Rescue!

Aqua Grabber was a game in Club Penguin, located at the Iceberg, where the player dove underwater in the Aqua Grabber 3000 sub, collecting treasure and returning it to a net. It was originally used to salvage parts of The Migrator during the Save the Migrator Project, but due to popular demand, the game stayed after the project ended. The game was played by navigating underwater with arrow keys, and using the sub's grabber with the spacebar to pick up objects and drop them off in a net. The sub would constantly slowly lose air, requiring the player come into contact with bubbles, or surface above water, to regain air.

When initially released, Aqua Grabber only had one unnamed level, and had no missions beyond collecting Migrator parts. The Golden Wheel Pin was awarded upon collecting all five parts. On April 2, 2008[2], the sole level had its Migrator parts removed and replaced with clams. There was a treasure chest in the newly added bottom area of the level.

On August 6, 2008, the original level, Clam Waters, was slightly expanded, including a new cave in the left of the bottom area with a giant clam, replacing the treasure chest, and five missions were introduced: find the main treasure (big pearl), find the rare treasure (black pearl), complete the level without losing a sub (life), complete the level in a time trial (limited time to complete the level), and complete the level in "compressed air mode" (fast movement but colliding with anything causes loss of a sub). Missions were unlocked by completing the previous one, but were reset if the game was closed. A second level, Soda Seas, was also released.[3] This had the same missions as Clam Waters, but instead of the big pearl and black pearl, there was an amethyst and emerald as the main and rare treasures, respectively.

On July 26, 2010, Aqua Grabber got a major update. Along with the release of stamps, the title screen was updated, and unlocked missions were changed to stay unlocked, even after closing the game. The Soda Seas levels were also made members-only. A bug in the game, which occasionally made it impossible to grab treasure after it was dropped, was also fixed.

One of the first sketches for the game

One of the first sketches for the game

A wallpaper featuring the game

The Giant Squid in the game 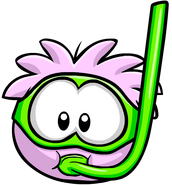 A Pink Puffle in the game 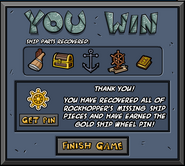 From the Save the Migrator Project 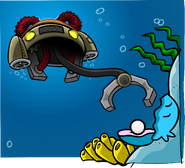 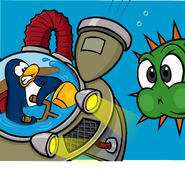 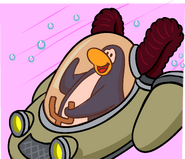