Were you looking for the game with the same name?

The Aqua Grabber was a miniature one-penguin only submarine, built by Gary the Gadget Guy. It was used in Aqua Grabber and the mini-game Aqua Rescue! from Club Penguin: Elite Penguin Force: Herbert's Revenge. The Aqua Grabber's older version was the Sub 1000 which could be seen in the Gadget Room during PSA Secret Missions. Its original purpose was to recover the broken pieces of The Migrator, although it was later used to gather treasure on the seafloor.

A few different Aqua Grabber machines appeared around the island. Their locations were as follows: 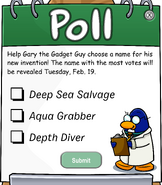 The poll that decided the machine's name 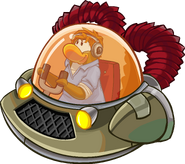 Retrieved from "https://clubpenguin.fandom.com/wiki/Aqua_Grabber_3000?oldid=1905859"
Community content is available under CC-BY-SA unless otherwise noted.