This article is about the famous penguin. For the stamp, see Aunt Arctic stamp.

Aunt Arctic is the news reporter and editor-in-chief for the newspaper on Club Penguin Island, the Penguin Times. She is responsible for keeping all penguins around the island informed about the weekly news. She is such a skillful writer that she even has her own advice column, "Ask Aunt Arctic", where she makes it her duty to answer any troubling questions her fellow penguins might have. Any penguin can submit his or her question to Aunt Arctic for a chance at submission. She is a key character in Mission #1, in which she had lost her green and purple Puffles that needed to be returned. She owned a Purple Puffle before they were available in the Pet Shop. Here is a video of someone meeting Aunt Arctic at the Play Awards:

Since she first appeared, she had a column in the Penguin Times, answering questions by anonymous players. She also used this medium to express her personal opinions and her background. There are many interesting things she has stated while answering questions:

She is the first person you can talk to in Club Penguin: Elite Penguin Force.

Many players speculated there was an Uncle Arctic. Since the popularity boost, Club Penguin appeased the believers with images hinting the possibility.

Aunt Arctic is also rumored to possibly be the Director of the P.S.A. because she has made many comments about the PSA in her Penguin Times column, and she was at the Night Club in a costume at the Halloween Club Penguin: Elite Penguin Force Mission. And if you roll your mouse over the glasses when you are on the "Ask Aunt Arctic" column in the Club Penguin Times, they will turn into secret agent-like shades.

Aunt Arctic at her desk.

Aunt Arctic celebrating the 100th issue of The Penguin Times. 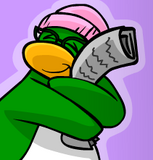 Aunt Arctic having sex with paper.

Aunt Arctic at her desk with two of her puffles.

A penguin with the background Aunt Arctic gave out.

Aunt Arctic, Gary, Cadence, and the Penguin Band in the Backstage.

Aunt Arctic rocking out for Music Jam 2009 in issue #194 of the Penguin Times.

Aunt Arctic as seen in PSA misson one.

Aunt Arctic in her igloo looking at her Stamp Book.

Aunt Arctic in the storm
Add a photo to this gallery

Retrieved from "https://clubpenguin.fandom.com/wiki/Aunt_Arctic?oldid=440488"
Community content is available under CC-BY-SA unless otherwise noted.