Aunt Arctic was an extreme-level stamp in Club Penguin. It was obtained by being in the same room as Aunt Arctic.

The pop-up showing that the stamp has just been earned. Note: It is in German. The translation is 'Stamp Earned! Aunt Arctic' 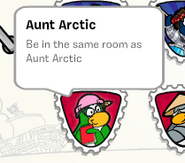 In the Stamp Book
Add a photo to this gallery

SWFEdit
Retrieved from "https://clubpenguin.fandom.com/wiki/Aunt_Arctic_stamp?oldid=1872216"
Community content is available under CC-BY-SA unless otherwise noted.