Bambadee was a penguin that was a stowaway on The Migrator in March 2007, who boarded just after Rockhopper left Club Penguin Island. Bambadee wore a striped Friendship Bracelet which he made himself, which was later released as a free item in the book Rockhopper and the Stowaway, a book that chronicled his time as a stowaway. 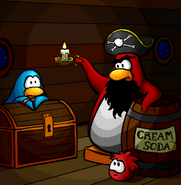 Bambadee hiding to remain a secret stowaway on The Migrator 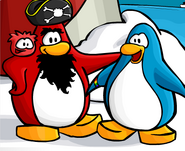 Bambadee recalling Rockhopper mentioning renovating part of the Migrator, in issue 78 of The Penguin Times

A postcard from Bambadee, on the Notice Board in August 2008

Bambadee in A Penguin Christmas Carol 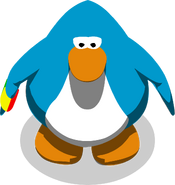 Rookie thanking Bambadee and several other characters for the year of 2012, in issue 375 of the Club Penguin Times

Polo Field saying he is not very fond of Bambadee