A ban is the most severe punishment that can be received in Club Penguin and Club Penguin Island for breaking any of the rules. The duration of a ban can range anywhere from 12 hours to a lifetime (meaning that the account is permanently disabled), depending on the severity of the infraction. If a player wants to create a new penguin with the same email address as a banned penguin, they will have to wait until the ban is lifted.

Players can help by reporting a rule breaker to the Moderators, but if the player suspected has not broken the rules, they will not be punished. If this was used on purpose, the player who falsely reported someone can also be banned in very rare instances when a Moderator sees them report an innocent penguin for fun. If you accidentally reported a penguin for the wrong reason, you can contact Club Penguin to make sure you don't get banned.

To learn more about bans, terminations, and reporting, see the List of Club Penguin Rules. 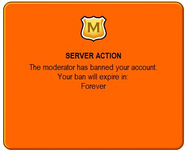 The oldest appearance of an indefinite ban notice

An old appearance of an indefinite ban notice. This one does not have a Moderator badge and has an 'Okay' button that redirects the player to the Club Penguin homepage 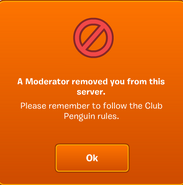 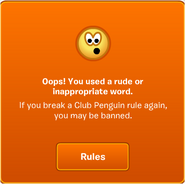 A warning for bad language 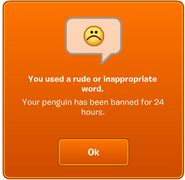 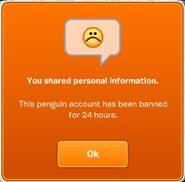 A ban for sharing personal information 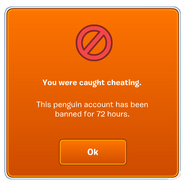 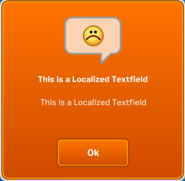 On the Club Penguin App

The current 24-hour ban notice for the app
Português do Brasil
Community content is available under CC-BY-SA unless otherwise noted.
Advertisement