Not to be confused with the building of the same name from Club Penguin Island.

The Basic Igloo was an igloo in Club Penguin. All players could obtain it for free when creating an account. 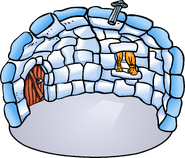 SWFEdit
Retrieved from "https://clubpenguin.fandom.com/wiki/Basic_Igloo?oldid=1872307"
Community content is available under CC-BY-SA unless otherwise noted.