The Beacon Boardwalk is a zone in Club Penguin Island. It is a shore by the sea, characterized by its large boardwalk in the center of the area. It features multiple attractions, including shops, a bay, an abandoned lighthouse, and a waterslide. Rockhopper's ship, The Migrator, is docked here, and Aunt Arctic resides here as well.

The Beacon Boardwalk was one of the original three zones in Club Penguin Island. In the 1.1.1 update, the Disney Shop was opened, and the shutter blocking the counter in the shop was removed.

In the 1.2.0 update, a pile of construction materials, including a crate, wooden posts, a tube, and a lantern was added by the path which would later lead to Mt. Blizzard. In the 1.3.0, the materials were replaced with an arch at the front of the path. The path itself can no longer be accessed, as walking under the arch transports the player to Mt. Blizzard. The coin previously on the path was moved next to the Foodtrekker.

In the 1.4.0 update, the Welcome Shop and Disney Shop were decorated with Cars 3-themed decorations. A cloud was added high above the Welcome Plaza, which has some coins and a treasure chest containing more coins. Additionally, the trampoline event was changed to include a score system that displays the player's highest bounce on the trampoline, and players can now bounce higher by jumping at the moment they fall on the trampoline as well.

In the 1.5.0 update, a Descendants 2 logo was placed on the Disney Shop. A buoy was added to the bay that allows access to the Tilt-o-Tube game.

In the 1.6.0 update, a crane, holding a sign with a pizza labeled "FRANKY'S" was added to the background, near the eastern side of the boardwalk. A tour guide sign was added to the Tilt-o-Tube game, and interacting with it causes instructions for the game to appear. On October 15, 2017, slime started oozing out from over the stone wall by the construction site, and also started emanating a green aura.

In the 1.7.1 update, the construction site and slime were removed, and a path to Island Central was added, as well as a railway above the path. Additionally, two more treasure chests and several more coins were added on top of the cloud.

A key feature of the Beacon Boardwalk is an event system in the Welcome Plaza. Every few minutes, there is a different event which takes place in the center of the boardwalk. While the amount of time each event lasts varies, there is always a three minute period of no event between them. All three events occur four times each per hour. If no event is occurring, a sign that displays a timer on top of the nearby Welcome Shop displays how much time is left until the next event starts.

The following table shows during what minutes of the hour which event, or lack thereof, occurs. "X" represents the hour.

Members can cast a fishing rod from the fishing pier at the boardwalk. To reel in, the player must repeatedly tap the interact button once there is a bite on the line. This is indicated by the interact button turning orange and the fishing line being jerked around. The player will receive a certain amount of coins, and, as of the 1.7.1 update, XP, depending on the object reeled in. A maximum of 10 lines may be cast a day.

These items only can be reeled in at specific parts of various adventures. None yield coins. Additionally, all have a weight value of 3, but lack rarity.

On the southwest end of the Boardwalk is a row of small icebergs, forming a semi-circle. The icebergs can be walked on, and one even houses a hot spring, and chairs around it, which all can be sat in, as well as two cannons that can be used by players to launch into the bay. The Migrator is also parked next to the icebergs. Between the icebergs and the shore, there is a large bay, also known as the "Geyser Lagoon" or "Geyser Pool", which is filled with seaweed. Many fish live in the bay, and can be caught in the fishing game. Additionally, a geyser erupts here roughly every 17 seconds, in one of eight possible locations.

The Migrator is a ship owned by pirate captain Rockhopper, used to sail penguins to the Beacon Boardwalk, and where the player starts the game after joining. It is docked at the west end of the Boardwalk. Rockhopper resides here, and talking to him allows members to play adventures. On the deck, there is a springboard that allows players to access the crow's nests above. One of the nests has a zipline that can be used to access the top of the Lighthouse, and the other has one where players land after using the zipline by the Water Slide. Directly next to the gangplank that leads onto the ship is a buoy numbered 4.

The Foodtrekker is a shop that specializes in food items that is parked on the west end. It has picnic tables nearby where players can sit. A short ways south of the Foodtrekker is a dock where members can fish multiple times a day. Objects reeled in are worth coins, with the amount varying by what is caught.

The Welcome Plaza is the central location of the Beacon Boardwalk. Here, special events occur periodically. By default, the boardwalk has a mosaic on it, with four different images drawn in each corner: two mountains, two fish, two trees, and two palm trees. Directly around the center is the Welcome Shop and Disney Shop, and The Exchange, where players can trade collectibles for coins. Aunt Arctic resides next to The Exchange, and talking to her allows members to play adventures. Between the aforementioned structures there are blocked paths with construction barriers nearby. East of The Exchange is a path that leads to the Coconut Cove.

In the southeast corner of the Boardwalk, there is a small hill, with a large water slide, which players can slide down into the bay from. Also on the hill is a picnic blanket and a few cushions that can be sat on, a zipline that members can use to access one of The Migrator's crow's nests, and a fountain named the Wish Squid.

High above the Welcome Plaza, there is a cloud platform, which can be accessed by bouncing enough times in succession on the trampoline while that event is occurring. There is nothing on the cloud except for a few coins and a treasure chest, containing more coins.

A rocky island located west of the Boardwalk. It cannot usually be accessed normally, but during the Pirate Expedition, it could be accessed from a portal at the end of the Penglantian Vault. It has various ruins on and around it.

Main article: Daily Challenges
The following zone-specific challenges can be completed here. Challenges with a dark gray background are currently unused, and do not appear in the game. 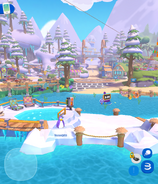 The icebergs and bay 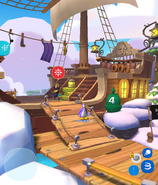 The deck of the Migrator 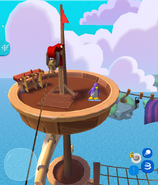 One of The Migrator's crow's nests 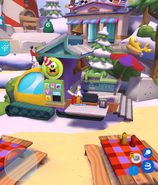 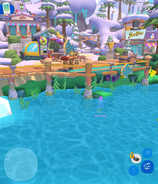 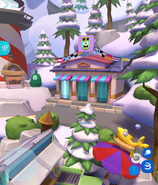 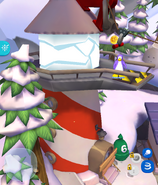 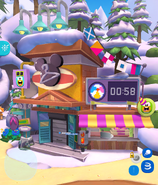 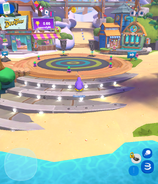 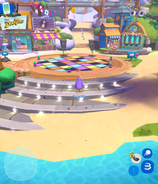 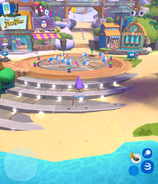 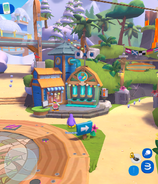 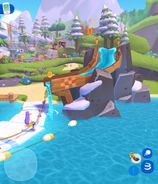 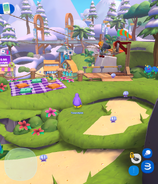 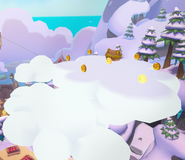 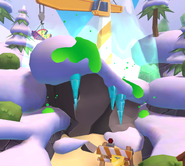 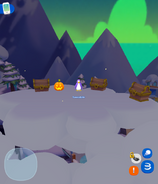 Holiday Party 2017
Add a photo to this gallery 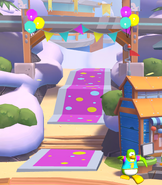 Medieval Party 2018
Add a photo to this gallery

Retrieved from "https://clubpenguin.fandom.com/wiki/Beacon_Boardwalk?oldid=1891719"
Community content is available under CC-BY-SA unless otherwise noted.