Beary Berry was an easy difficulty stamp in Club Penguin. In order to obtain this stamp, the player had to serve Herbert P. Bear in Smoothie Smash. 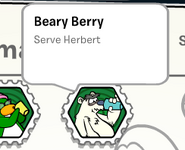 SWFEdit
Retrieved from "https://clubpenguin.fandom.com/wiki/Beary_Berry_stamp?oldid=1872360"
Community content is available under CC-BY-SA unless otherwise noted.