The Big-Big Kahuna was a totem originated in Innocent Island. It was brought to the Club Penguin Island by Rockhopper for the Adventure Party: Temple of Fruit party, where it was featured in the Volcano Mouth.

Players could obtain the Yellow, Green and Red Kahuna Backgrounds by standing on platform with the corresponding color at the Volcano Mouth and throwing snowballs into the Big-Big Kahuna. Obtaining all 3 backgrounds allowed picking up the Grape Bunch Costume. 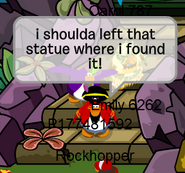 Rockhopper regretting bringing the totem to the island

In the labyrinth
Add a photo to this gallery

Retrieved from "https://clubpenguin.fandom.com/wiki/Big-Big_Kahuna?oldid=1891451"
Community content is available under CC-BY-SA unless otherwise noted.