Big Wigs was one of the two catalogs in the Gift Shop available from October 12, 2007 to January 2, 2009. It featured wigs and would update every two months. It merged with Penguin Style in January 2009, meaning that the catalog only lasted for about a year and a half. 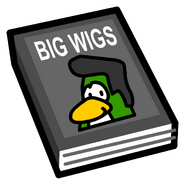 The icon for the catalog

The Gift Shop before the catalog was launched