Black Puffle Sightings were an occurrence all over the island, from September 11, 2009 until the end of Halloween Party 2009, in November 2009. They could be seen at the Dojo Courtyard, the Ninja Hideout, the Ski Village, and the Forest. They would flame up if players went near them while wearing a Ninja Mask and/or a Ninja Outfit and/or Cloud Wave Bracers. They were later revealed to be a sign for Card-Jitsu Fire.

The puffle sightings were later linked to the Dojo, and a scavenger hunt by Sensei had been started, as well as construction in the Ninja Hideout. 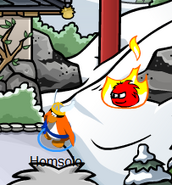 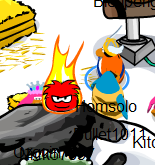 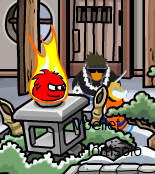 Ski Village
Add a photo to this gallery
Retrieved from "https://clubpenguin.fandom.com/wiki/Black_Puffle_Sightings?oldid=1872465"
Community content is available under CC-BY-SA unless otherwise noted.