The Box Dragon was one of Club Penguin's April Fools' Party 2009 pranks. It was located in the Forest. It appeared harmless and very sleepy. If its head was moused over, it blinked and blew smoke from its nostrils, and if its tail was moused over, it wagged. It also appears in some of the Box Dimension levels of Puffle Launch.

It has a dragon-like appearance made out of boxes. The major body parts are light brown and the details are a darker brown. It is made up of 35 movable boxes.

The Box Dragon in the Forest

The Box Dragon in the Club Penguin start screen 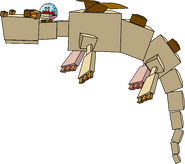 The dragon while controlled by Klepto
Community content is available under CC-BY-SA unless otherwise noted.
Advertisement