Boxes are widely used all around the Club Penguin Island, in particular for storage purposes.

Their first significant usage, however, was at the April Fools' Party 2009, where boxes created by Gary were used to play April Fools' jokes on penguins. Some of these boxes would explode, freeze, or lead penguins into different rooms. There was a Box Store, where furniture boxes were sold. 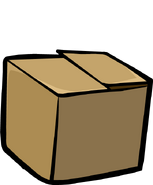 The Box Store, where boxes are sold

The Box Dimension
Add a photo to this gallery

Retrieved from "https://clubpenguin.fandom.com/wiki/Boxes?oldid=1833279"
Community content is available under CC-BY-SA unless otherwise noted.