The Captain's Quarters was a room inside The Migrator, a pirate ship owned by Captain Rockhopper. This room was where Rockhopper made maps, counted his loot, planned treasure hunts, and along with Yarr, slept. Treasure Hunt could be played in this room. In order to gain access, players needed Rockhopper's Key Pin.

Like the Ship Hold, various objects were stored here, although much less in comparison. Some of the objects were dear to Rockhopper, such as the Friendship Bracelet he received from Bambadee, and the camera he received from Aunt Arctic. On the wall, there was a corkboard, which always had notes and pictures of things Rockhopper wanted to do on his current visit.

The room was decked out with treasure, which was in a pile next to Rockhopper's desk, in the upper right corner of the room. The lower area was occupied by sandboxes for Treasure Hunt, with carpets beneath. In the lower left corner, there was a drawer with a mirror. The upper left corner had the door leading out, with two palm trees on either side.

The Notice Board was also here, which, each time Rockhopper visited, had different information on it.

The key to get inside was hidden at the end of his journal, which is located in the Book Room, after Rockhopper's Arrival Party ended on April 28, 2008. 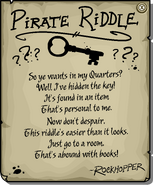 The note when trying to enter without the key 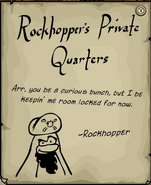 The note when trying to enter before the key was released 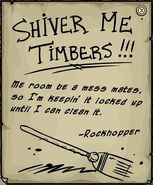 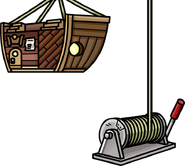 The exterior of the Captain's Quarters, as seen during the Save the Migrator project