Captain Rockhopper vs. Mighty Squid is one of the Club Penguin Animated Shorts episodes. In this episode, Rockhopper fights a giant squid, who thinks that Yarr is his red ball.

Rockhopper sails the seven seas while a giant squid plays with a ball. The giant squid loses his ball, and it ends up being on the Migrator, so he swims towards it. It comes from under the Migrator and pushes it up and starts shaking it around from side to side. The squid puts the ship down and gains up on Yarr, thinking it was his ball. Rockhopper sees the squid attacking Yarr and catches him with a net and drops an anchor on the squid. The squid comes at Rockhopper and Yarr with the anchor and they switch what they are holding, Rockhopper holding the anchor and the squid holding the net with Yarr in it. Rockhopper loses his balance with the anchor and falls. Rockhopper uses a rope and gets Yarr back. While Rockhopper thinks he has saved Yarr, Yarr lands on a big net and is bounced into the squid's mouth. Rockhopper, thinking the squid had eaten Yarr, prays for his pet's "death" but the squid spits him out. Rockhopper uses a rope to bring him and Yarr up to the Crow's Nest. The squid and Rockhopper fight while Yarr finds the squid's ball and shoots it out of a cannon. It flies away from the squid, who chases after it. 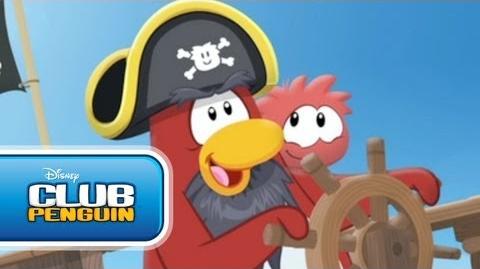