Card-Jitsu was a card game played in the Dojo, member igloos (through Card-Jitsu Mats) and formerly, the Ninja Hideout. To get there, players needed to go to the Dojo Courtyard, which was accessible via the map or the Mine Shack and enter through the doors.

On a player's first visit, they had to talk with Sensei, the owner of the Dojo. He would tell the player about the game and give the Starter Deck as well.

According to the Belts Legend, belts were earned faster if players used the "Earn Your Belts" mode instead of playing on a mat. The belts ranked from white belt to black belt (excluding the rank of ninja).

Since May 28, 2009, players could see their deck at the Dojo and Dojo Courtyard. They needed to click on the icon with 3 cards at the bottom right corner of the screen.

Once players received the cards from the Starter Deck, they had to go to a mat, or talk to Sensei and select "Earn Your Belts" (as mentioned before, this mode was recommended as you got new belts quicker). If they used a mat, they would have to wait for another player to come and play with them, which might take a while. If no one came to your mat, you could switch to a busier server, or a match could also be found in under 10 seconds by speaking to Sensei on the "Earn Your Belts" mode.

The objective of the game was to beat opponents by collecting sets of winning Card-Jitsu cards. Only certain cards would beat others, via the form of Rock, Paper, Scissors.

Once players had an opponent, they would be taken to the arena, and would bow to each other. Both players had 20 seconds to choose a card. If they failed to choose a card, one would automatically be selected when the timer reached zero. Once both players have chosen a card, they were revealed. The winner kept the card to help make a set.

However, in the event of similar types of cards being played, the card with the highest number would win. If the numbers also matched, a draw would happen.

There were three ways to win a match. First, players could have the same type of card (such as Snow, Water or Fire), but three in different colors, such as Red, Blue, Green, etc. Alternatively, you could have one of each card, in different colors. Also, if you played a power card with a "No Snow", "No Fire" or "No Water" until the next round and the opponent player had only that element, no card could be placed, thus automatically making you the winner. You could also see how to play by mousing over the question mark "?" during a match.

When players won a round, your penguin might perform an action. They are as follows:

For a list of cards and its special effects see Card-Jitsu Cards.

After playing a certain number of games, players were rewarded with a belt. When they reached black, they had to fight Sensei to earn their mask and become a ninja.

The Ninja Mask
Add a photo to this gallery

Card-Jitsu Fire was released on November 23, 2009. In Card-Jitsu Fire, you had to move through the tiles according to the number which was shown on the dice-like circle in the middle of the Volcano. Only ninjas that had the Amulet could play the game. Card-Jitsu Fire was a multiplayer game, with 2–4 players at once. Instead of earning belts, you would get a Fire Suit by unlocking item by item, starting with shoes up to the head. When you got all of the items, you had to beat Sensei to earn a Fire Gem on your Amulet, and become a Fire Ninja.

Card-Jitsu Water was released on November 24, 2010. In Card-Jitsu Water, you had to move from the end of the Waterfall by throwing the correct element that would beat the other element to get to the next platform. It was located in one of the secret doors, like Card-Jitsu Fire, so only penguins with the Amulet could get to the room. It was a multiplayer game, with 2–4 players at once. Instead of earning belts, you would get a Water Suit by unlocking item by item, starting with shoes up to the head. When you got all of the items, you had to beat Sensei to earn a Water Gem on your Amulet, and become a Water Ninja.

Card-Jitsu Snow was the most recent game in the series. It was released on May 23, 2013 as confirmed by Spike Hike and Polo Field on Twitter. It was the first Card-Jitsu game to be beta tested. Beta Testing began on February 28, 2013 and ended on April 11, 2013. Unlike the other games in the series, you had to team up with other ninjas to battle Snow Minions in order to win. There were three rounds, and you had to win all three rounds to complete a match or to enter the bonus round if you met the requirements (every ninja with full health; complete the three sessions in the time limit; no ninjas down). After you earned the Snow Gem, you could battle Tusk alongside Sensei and two other ninjas, and become a Snow Ninja. If you won, you could earn even more snow-themed items beyond the Snow Suit. 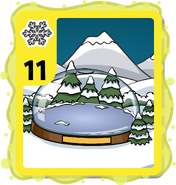 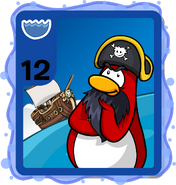 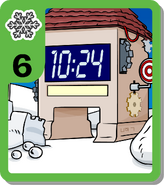 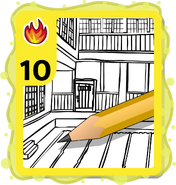 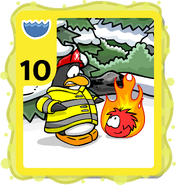 An example of a player with exactly 100 cards 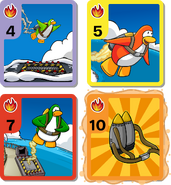 4 rare cards (the Rank 7 was not that rare, if you were lucky you would get it in the Fire Booster Deck) with the Jet-pack theme 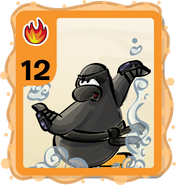 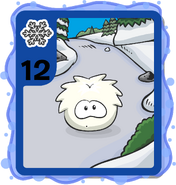 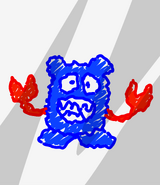 A puffle deck card with the "Abominable Snowpuffle" sketch seen in PSA Mission 5: Secret of the Fur 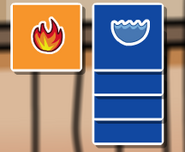 A page of cards

An example of a real life card

An example of a power card (3rd Anniversary Party)

An example of a power card (Aunt Arctic) 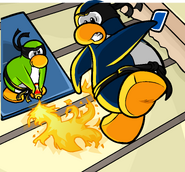 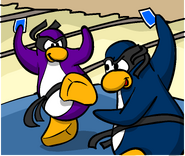 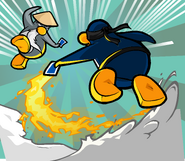