Card-Jitsu Shadow was a theoretical game that could have been in Club Penguin. Due to the small black gem in the center of Amulets, rumors circulated about a "fourth" element, of shadow. At one point, the Club Penguin Team seemed to have began to consider making this game a reality, and came up with various ideas about it. While little official information relating to Card-Jitsu Shadow has been given, multiple staff members have commented on it when asked.

It was not made into a real game before Club Penguin's shutdown in March 2017, and did not appear in any capacity in Club Penguin Island before it was discontinued.

On June 1, 2011, four items, forming a shadow-themed ninja suit, were added to Club Penguin's files: the Shade Sandals, Nightfall Coat, Midnight Mask, and Helmet of Shadows. None of these items could ever be obtained without cheating, but were originally planned to be available from a Card-Jitsu mobile port that was never released.[1] The items were added to the files roughly two weeks after the Club Penguin Trading Card Game – Card-Jitsu: Water Second Wave set of cards was released in stores. Codes from this set could have potentially unlocked any of four cards, themed around shadows. These four cards (all seen in the gallery below), unlike almost all other cards that appeared in online Club Penguin (the only other being the "Amulet Construction" card), did not have real-life card equivalents. One of these cards, a power card named "Mobile Fire Power Card 1", featured a penguin wearing the shadow-themed ninja suit, comprised of the four aforementioned shadow-themed ninja suit items. The animation of this power card caused the user to temporarily wear these items.

In January 2013, when Spike Hike was asked if Card-Jitsu Shadow would be released, he responded with "Snow first"[2] implying that if Shadow were to be released, it would not be until after Card-Jitsu Snow was (which had not been released at the time). A few months later, shortly before Snow's release, when asked if Shadow was real, Spike Hike responded that it is "currently a rumor", but he "believes in it".[3]

On April 23, 2014, Polo Field stated on Twitter that they were "not working on anything Card-Jitsu-related at the moment."[4]However, a few days later during a Spike Saturday meet-up on April 26, 2014, Spike Hike mentioned that "Card-Jitsu Shadow will take a while".[5] However, he may have meant "would" instead of "will".

A comic in issue 459 of the Club Penguin Times has a Yellow Ninja Belt-wearing penguin claim there is more than one element, prompting a Black Ninja Belt-wearing penguin, in surprise, to question if the penguin with the yellow belt "knows shadow", but the penguin instead remarks that they "know cheese". In the secrets section of next issue of the newspaper, issue 460, Sensei shared a list of five claims, asking for his students to figure out of which of them is true. One of them is "Some have found the way to practice forgotten styles like Shadow... and Cheese".

In February 2015, a player visited Club Penguin's headquarters in Kelowna and conducted an interview with Polo Field. He stated that the Club Penguin Team "definitely want [to work on] Shadow", and they "have really, really good ideas for what [they] want Shadow to be". However, he stated that the team wanted to port the original Card-Jitsu game to mobile devices first.[6] The mobile Card-Jitsu port never ended up being finished.[7]

During a Megg Monday meet-up on July 18, 2016, after asking players for party suggestions, Megg passively stated "no shadow" in response to a player stating "SHADOW CARD JITSU!", although it is ambiguous whether she meant there would be no Shadow party, or no Card-Jitsu Shadow whatsoever. 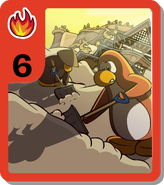 The "Mobile Fire 1" card; this and the following three cards are shadow-themed, and were unlockable from Second Wave code cards 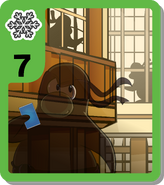 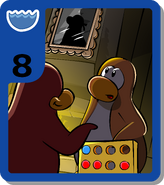 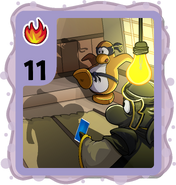 A penguin wearing the shadow ninja suit, seen in the animation for the "Mobile Fire Power Card 1" power card

Sensei commenting on it during the Hollywood Party

The comic in issue 459 of the Club Penguin Times, referencing shadow as an element

Sensei's list of things relating to ninja, one of which being a truth, with penguins practicing "shadow" among the possible truths 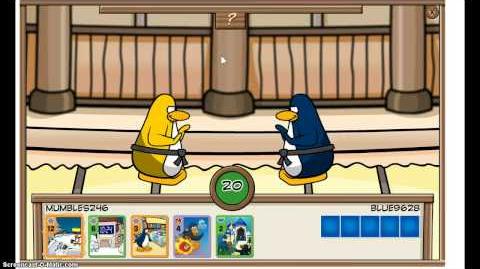 These names are conjectural, and are derived from a combination of their language's version of "Card-Jitsu (element)", as well as their language's translation of "Shadow" used in issues 459 and 460 of the Club Penguin Times.