Cart Surfer was a Club Penguin minigame that could be played in the Mine. The main objective of the game was the performance of various tricks and stunts to earn points (similar to Catchin' Waves) while riding a Mine Cart on a track. When players finished the game, they were brought to the Mine Shack.

This was one of the most popular games in Club Penguin, as it was a quick and consistent way to earn a decent amount of coins by using the most optimal moves (see table below). This may have been due to the fact that the game had to be made in a very short span of time, so developers did not have time to perfect the coin system for the game[source needed]. In Club Penguin: Elite Penguin Force, an adaption of this game for the DS appears, which can be played with either the D-pad and buttons or touch screen. It has more obstacles than the online version, and features an extreme mode as well.

The most efficient way to get coins on Cart Surfer was to alternate the Flip and Spin, Handstand or Run on Tracks: a 100 scoring stunt and any of the 80 scoring ones. Cart Grind was the highest scoring stunt for the turns. It also helped to crash a few times near the end, which gave the player more time to do tricks. When a player lost a life, they got the chance to perform about 2–3 moves before the next turn so they had to use their lives wisely and could get an extra 540–840 points. Note that if a trick was performed twice or more in a row, the points it would yield normally were halved, until a different trick was performed.

An efficient player could earn approximately 450 coins per game. If a player had all the stamps for the game, their coins would be doubled, giving them 900 coins.

* Jump was not counted for the Trick Master stamp.

** Surf Turn and Cart Grind varied in point value based on how long the trick was performed. (All points void if the player crashed.) 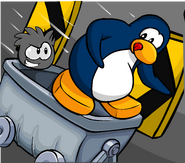 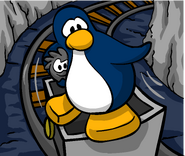 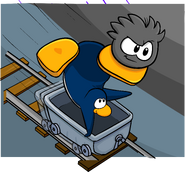 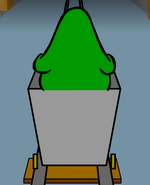 A normal penguin on a cart 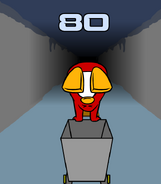 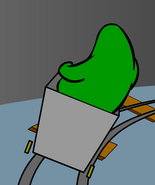 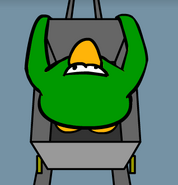 A penguin leaning back 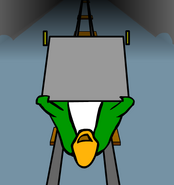 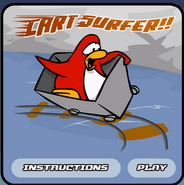 A wallpaper of Cart Surfer 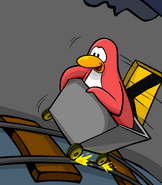 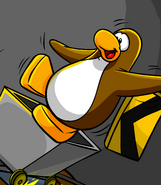 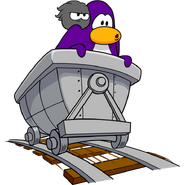 A cart surfing Dark Purple penguin with their Black Puffle, as seen on a loading screen

A Light Blue penguin riding with a Black Puffle, last seen in issue #508

The entrance to Cart Surfer 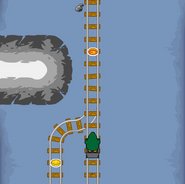 A screenshot of "Cave Runner", a prototype version of Cart Surfer

A screenshot of Cart Surfer in early development