Cheating was when a player obtained extra items, earned extra coins, accessed unavailable or limited features, and so on, by way of third-party programs.

Cheating was strictly against the rules of Club Penguin, and any player that cheated got banned for 72 hours or forever, depending on previous offenses on the player's account. Using websites to find the location of a pin, a secret in a catalog, or a walkthrough for a game or party were not considered cheating. Club Penguin encouraged all secret agents, as well as every penguin, to report any suspected cheating.

Trainers were programs that were downloaded onto the player's computer. The player then plays Club Penguin through the program using add-ons and plugins to cheat Club Penguin. Many add-ons were client side, meaning that only the player using the program can see the hack. Players were unlikely to get banned for client-side hacks. Client-side hacks would include changing a penguin's name, color, size, or changing to mascot clothing.

Trainers were commonly used by players in the past, however, most have patched.

Follow bots, or "clones", were programs that caused "clones" of the player to follow them or (talk, throw snowballs at the same time etc.).

Adders were online or downloadable software that allowed the players who used it to get items on Club Penguin. These were the most common form of cheating, and players usually used these to gain extra items, coins, furniture, or igloos.

A hacker with Rockhopper's Player Card

A giant Brown penguin spotted in the Town 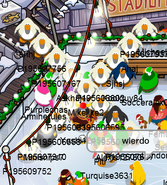 A group of clones 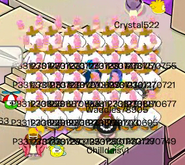 Another group of clones

Several clones spotted at the Stadium

Clones spotted in the Plaza

Clones spotted on the Iceberg 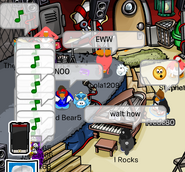 Clones spotted in the Lighthouse
Add a photo to this gallery

Retrieved from "https://clubpenguin.fandom.com/wiki/Cheating?oldid=1912468"
Community content is available under CC-BY-SA unless otherwise noted.