Chip Maze was a minigame in Club Penguin exclusive to EPF Agents. The game was originally available in Field-Ops, and had been playable through the game Spy Drills since May 2013.

The game consist of a maze, containing one charging plate and 4 chips. The player had to guide a battery through the maze in order to power up the chips, which was done by leaving the battery on a given chip's charging point. When emptied, the battery could be brought back to the initial charging plate to be recharged.
Through the maze a series of zappers appeared. Each zapper electrified a tile on one of its sides for a second, and after a short interval rotated 90 degrees clockwise and hit the next tile. If it hit the battery, it would lose some of its power, until the zapper restarted or until the player quickly moved to another tile.
One of the paths may have been locked and therefore inaccessible, and could've be unlocked by positioning the battery on top of a key icon in the maze.

The goal was to charge all 4 chips in the maze. The game ended by either successfully fulfilling the goal, or if the battery was emptied by zappers- on which case the player loses. 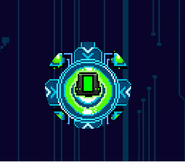 At the start of the game

Another possible maze
Add a photo to this gallery

Retrieved from "https://clubpenguin.fandom.com/wiki/Chip_Maze?oldid=1905969"
Community content is available under CC-BY-SA unless otherwise noted.