Clams primarily appear in the Clam Waters level of Aqua Grabber. Several clams are scattered throughout the level, and all have pearls in their mouths. Players have to wait near them for several seconds, so they fall asleep. While asleep, the pearl in their mouth can be retrieved. One clam in the level has a black pearl instead of a normal one, the location of this clam is random each time the level is entered. If a player bumps into a clam while it is asleep, it will wake up and close its mouth.

At the bottom of the level there is a giant clam, which is asleep, and has a grand pearl in its mouth. If this pearl is taken, the clam wakes up, eats the player, and then spits them out, heavily reducing the Aqua Grabber 3000's air supply. In order to retrieve the grand pearl, a nearby pearl-shaped rock must be grabbed and dropped in the giant clam's mouth. The pearl can then be retrieved without waking it up.

In the Club Penguin App mini-game Sushi Drop, clams with appearances identical to the giant one appeared. Sushi dropped would fall into their mouths, and a coin bonus, or sometimes an item, was received depending on how close the clam was to the center that ate the dropped sushi. 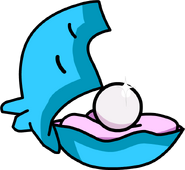 A clam with a normal pearl 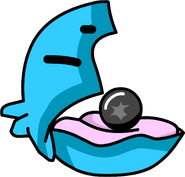 A clam with the black pearl 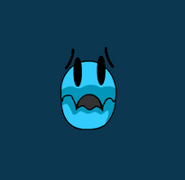 The giant clam
Community content is available under CC-BY-SA unless otherwise noted.
Advertisement