The Classy T-Shirt was a body item in Club Penguin. It cost 150 coins in the Penguin Style and Music Jam 2011 Catalogs, and only members could buy it. It could also have been unlocked from series 13 of the Treasure Book. 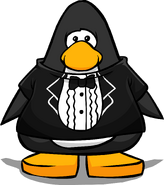 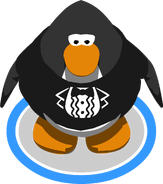 As seen in a You Decide! poll on the What's New Blog

As seen in the March 2010 Penguin Style catalog, along with the Cumberband Hat and Untied Sneakers

As seen on the Check out my igloo postcard, along with the Duke's Hat

As seen in the February 2012 Penguin Style catalog, along with The Trend, Red Cotton Scarf, Silver Watch, and White Dress Shoes

As seen on the You are this month's VIP postcard, along with the Cumberband Hat and Untied Sneakers

Tourdude wearing the item
Add a photo to this gallery

Retrieved from "https://clubpenguin.fandom.com/wiki/Classy_T-Shirt?oldid=1889860"
Community content is available under CC-BY-SA unless otherwise noted.