Clothes, or clothing, are optional items that penguins can wear. Most clothes can only be purchased by members, but non-members can still obtain party items, unlock items from the Treasure Book and also buy certain clothing items. Clothes can be bought in some catalogs, including catalogs that are available during special occasions.
Clothing items are stored in the inventory, where the players can use items they have previously obtained, and wear other items. Clothing are removed by clicking the item on the penguin in its player card.

Clothing items from the same sort cannot be worn at once; When trying to do so, the new item replaces the former item. Puffles were counted as hand items before, but if you walk a puffle, your hand item will not detach from your player card, you will still be holding it.

The 2008 system was added after the completion of the Club Penguin Improvement Project defined cascading IDs from 1,000 to 9,999. The system is based on the following rules:

The system used since late 2013 is an extended version of the 2008 system, which was added for a lack of available IDs. It is identical to the 2008 system but works by these two extra rules:

Whenever a new issue of the Penguin Style is released, it includes a "Penguins At Work" section, where players can buy outfits- each month of a different job- and perform special dances with it.

A comparison between a penguin's appearance on a player card and in-game.

Special dances can be performed with some items- on this case, the Ghost Costume and the Flashlight. 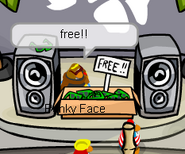 Free Item Stands are common in many parties.
Add a photo to this gallery