ClubPenguin.com was Club Penguin's official URL. It had information about Club Penguin listed there and also allowed you to play the game, Club Penguin.

Shortly after Club Penguin was discontinued on March 30, 2017, the website was changed to redirect to ClubPenguinIsland.com. Following Island's discontinuation on December 20, 2018, both sites now redirect to the official Disney website. As of June 13, 2020, the "play.clubpenguin.com" website shows a page with the "Waddle On" image that was shown on April 1, 2017, before the redirection. The normal domain redirects to "clubpenguinisland.com", which is inaccessible.

The Homepage (URL: clubpenguin.com) was the domain's main page. It featured information about upcoming parties, games, promotions, and navigation to other pages of the website.

The PSA Missions section (URL: clubpenguin.com/fun-stuff/psa-missions) was a special section where you could play the old PSA Missions. The missions were moved here on December 6, 2012, because the VR Room became inaccessible when the Tube Transport was badly damaged by Herbert P. Bear during Operation: Blackout. The PSA Missions were later moved back into the game on June 11, 2015.

The Apps (previously named Mobile; changed in 2015) section (URL: clubpenguin.com/apps) was a section where you could see Club Penguin's apps. The shown applications were the Club Penguin App, Sled Racer and SoundStudio App.

From February 2017 to March 31, 2017, the mobile section led the player to ClubPenguinIsland.com.

The What's New Blog (URL: clubpenguin.com/blog) was a blog where you could see "what's new" in Club Penguin - and players would usually post comments showing their appreciation, or ask a question. The main editors of the blog were: Spike Hike, Polo Field, Ninja, Megg, Daffodaily5 (She posted the Featured Fashions and Penguin of the Week) and Federflink1 (A German blogger) now retired.

The Membership section (URL: clubpenguin.com/membership) was where you could make your penguin a member by buying a membership. It also included FAQ's about membership and reasons to become a member.

On January 31, 2017, membership could not be purchased anymore, due to the discontinuation of the game.

The Parents section (URL: clubpenguin.com/parents) was where parents of kids who have made accounts could review the child's account, like how many times the player has been banned, how many times has the player logged on, how many coins does he/she has, change the chat mode, turn on the Parental Timer, change passwords, and manage memberships.

The Products (previously named Toys; changed in February 2013) section (URL: clubpenguin.com/products) first opened on the Club Penguin website on August 31, 2006. It was originally called the Club Penguin Online Shop, and it only sold Plush Puffles. Since October 2008, the store started to sell newer toys, such as Trading Cards, plushes, Mix & Match sets, books, etc. Later on, other products such as shirts and phone cases could be found in the page.

It was removed on October 2016 and was replaced by the Apps section.

On June 20, 2011, Club Penguin forgot to renew their DNS (Domain Name System), so the site went down for an entire day, sparking concerns from players.[2][3][4]

Happy77 posted this onto the What's New Blog regarding the situation:

On July 15, 2013, at around 1:39 PM PST, Polo Field made a tweet reporting that Club Penguin was down.[5] Unlike other downtimes, which usually lasted for minutes, this one lasted for around 12 hours. Some reports indicate that the cause for this downtime was a Denial-of-service attack executed by unknown users.

For the following hours several tweets were posted by Spike Hike, Polo Field and Club Penguin regarding the situation, and later moving on to discuss other topics to dissipate the fear on the players.

At around 1:45 AM, Club Penguin posted a tweet on their Twitter saying that the servers were back online and that the team were squashing final bugs.[6]

From the afternoon of November 26, 2014 until December 2, 2014, the What's New Blog temporarily shut down due to it "updating stuff behind the scenes". It is currently unknown to what the downtime was for, though it is believed it was for bug fixes.

The former version of the Club Penguin home page. It was replaced in August 2011 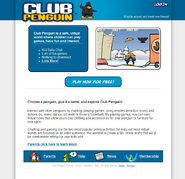 The first version of the main page. When you click on the "N," a Ninja would appear 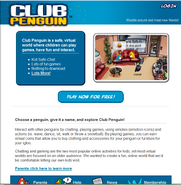 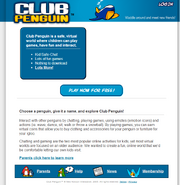 The website with a sleeping penguin in its header 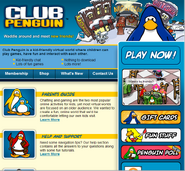 An old version of the website, used from February 2006 to 2008. Like the first, the "N" will make the penguin wear a Ninja Mask

The website in June 20, 2011, when Club Penguin forgot to renew their DNS

The August 2011 version of the site

Before the Underwater Expedition (2012)

Before the Puffle Party 2012

The homepage when Puffle Trouble was released

After Make Your Mark: Ultimate Jam 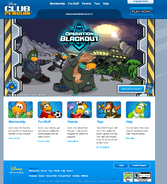 Homepage during the release of Club Penguin App

The homepage background after the release of the Club Penguin app

The homepage before the Puffle Party 2014

Alternate Homepage, as of February/April 2014 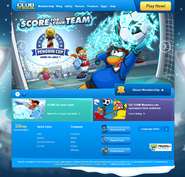 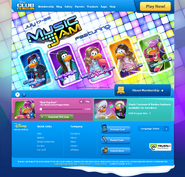 The homepage design prior to the Music Jam 2014

The homepage before the Frozen Party

The homepage before the Halloween Party 2014

The homepage before the Pirate Party 2014

A message that appeared when pages on ClubPenguin.com were being updated

The discontinuation message that appeared on the site after the game was shut down, as of April 1, 2017
Add a photo to this gallery

Start a Discussion Discussions about ClubPenguin.com