This article is about the Nintendo DS game. For the series, see Club Penguin: Elite Penguin Force (series).

On Monday, July 14, 2008, Club Penguin officially announced one of the largest projects the company would probably ever do.[4] They planned to release a special edition of Club Penguin for the Nintendo DS. It was released in North America on November 25, 2008, and in Europe on March 13, 2009. Before the release of the game, they decided the name could be "Club Penguin: Elite Penguin Force".

Nearly a year after the original release, a collector's edition was released, which contains a 2,500 coin code card, an "EPF" logo stylus, and a DS skin.

The gameplay is very similar to the online missions, by tapping the Touch Screen.

The box contains a small card with a one-time use code printed on it, that, when entered into Unlock Items Online, grants the player a Spy Phone, EPF Certificate, and 1500 coins.

In the game, your penguin is assigned an Elite role ranked superior to the secret agents, an "Elite Penguin Force agent". Players embark on missions utilizing both familiar and all-new gadgets, accessories, vehicles, and locations to investigate mysterious events on Club Penguin Island. In addition, the game operates with the Nintendo Wi-Fi system, coins that you earn in the DS game could be sent to the online Club Penguin game. Coins can be earned by playing mini games.

The player is promoted to an ultimate high clearance level by the director for clearing the great climax and saving the entire region of Club Penguin.

On May 25, 2010, a sequel named Club Penguin: Elite Penguin Force: Herbert's Revenge was released. The sequel follows the plot left by online missions. 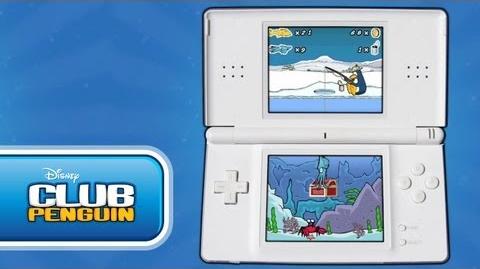 Retrieved from "https://clubpenguin.fandom.com/wiki/Club_Penguin:_Elite_Penguin_Force?oldid=1892272"
Community content is available under CC-BY-SA unless otherwise noted.