Everyone is in the spirit for Halloween treats, except for master- prankster Blizzard-- who feels that tricks are the treat.
After ruining his friends’ Haunted Igloo attraction with his latest prank, Blizzard befriends a smart-aleck specter named Poltergus. The pranking pals accidentally unleash a swarm of unfriendly ghosts who terrorize the island!
Can Blizzard convince his friends to trust him and stop the ghoulish gang from turning everyone on Club Penguin Island into gruesome ghosts?

The special starts with many penguins celebrating Halloween with Trick-or-Treating. The scene changes to the Haunted Igloo. Cake and Awesome and other penguins are lining up to enter the igloo. Gary comes and tells Cake and Awesome that he isn't going "to be scared easy" but he screams and jumps in Awesome's arm when the clock strikes 8 PM. Later, the door to the haunted igloo opens and Jangrah comes out and introduces herself to Cake and Awesome as Jangrah-Belle, their ghoulish guide on the tour of terror. Cake, Awesome and Gary enter the Haunted Igloo.

At the first room, Jangrah introduces Count Roofhowsula. Roofhowse comes out from his vampire tomb and scares Gary, Cake, and Awesome. But when he is going to say "blah, blah, blah", his fake vampire teeth fall out from Roofhowse's mouth and Jangrah quickly moves on to the next room leaving Roofhowse who is trying to get his vampire teeth. When they arrive at the next room, Jangrah introduces the Haunted Parlor, a room where Madame Lorna is inside a crystal ball who communicates with "unseen forces". Gary doesn't seem scary about it. The furniture starts to rattle and Lorna is trying to communicate with the ghosts and tell them to send a message from the world beyond. After it, many outdated technologies tied in a rope drop and scare Gary. The next room is the Haunted Science Lab, where Doctor Sydmullstein is bringing to life his latest creation. Blizzard is supposed to hide in the chair but instead it's replaced with pillows. Jangrah asks where is Blizzard and Sydmull doesn't know. Jangrah apologizes to Cake, Awesome, and Gary then Blizzard comes out from the door with zombie penguins chasing him. Gary says that the zombies are very convincing and thinks that the zombies are fake but Jangrah tells him that the zombies aren't part of the ride. Gary is scared and everyone runs to the Haunted Parlor room. Lorna asks what's going on and Sydmull tells "non-scripted zombie attack". Lorna screams and fogs up the crystal ball, wipes it with her beak and continues screaming. Roofhowse comes and his vampire teeth fall out once again. When he sees the zombies destroying the wall, Roofhowse is also scared and joins the others. Jangrah asks what to do and Blizzard comes and dances with the zombies and tells everyone that he is tricking them. Jangrah's face starts to turn red and starts to stream and screams "BLIZZARD!" loudly.

The scene cuts outside of the Haunted Igloo and Jangrah apologizes to Cake, Awesome, and Gary for the not-in-the-program zombies. Jangrah is angry at Blizzard because he does the zombie trick every Halloween and he is fired. Blizzard says that he is the only one who fits the costume and the rest of the gang come out from the igloo. Sydmull and Lorna ignore him and Roofhowse tells Blizzard that most people prefer treats over tricks then he joins the others to go back to the Haunted Igloo. Blizzard angrily says that he got the whole night of Halloween and he doesn't need them to slow him down. While he is walking he meets a ghost Poltergus, and tells him that he likes to pull tricks, as they sing the song Gotta Get The Gotcha! they arrive at the Petrified Pumpkin, where Poltergus puts Blizzard to a test, he wants to know if Blizzard is brave enough to pull the Petrified Pumpkin off, at first Blizzard hesitates, but he agrees to pull it, when they remove the Petrified Pumpkin, Blizzard asks what is going to happen now, Poltergus says wait and four ghosts are released named Redrum, Blooky, Yella and Greepy. When the four are finally free they immediately start to turn other penguins into gruesome ghosts too, back to the Haunted Igloo Mansion, Blizzard again enters with fear along with Poltergus saying that four ghosts are turning everyone on the island into ghosts, at first Jangrah doesn't believe him, but when the four enter they say that the Haunted Igloo Mansion isn't scary enough, and they decide to make the attraction more scary, Jangrah and the others run out, and they ask Gary what to do, Gary starts telling how his uncle, Gariwald VIII was experimenting with proto-plasma when he accidentally created the four ghosts, in order to save the penguins being turned into ghosts, Gariwald came up with the idea to lock the four ghosts with a pumpkin which then became the Petrified Pumpkin, but now Gary doesn't know how to lock the four ghosts again, suddenly Blizzard comes up with the idea to host a "party" and asks Poltergus to invite Redrum, Blooky, Yella and Greepy to the party, when the four ghosts hear that there is going to be a party they accept the invitation, when they arrive there Blizzard is pretending to be a security, he asks them if they are in the list but Redrum replies to him they got invites, and Blizzard says "why didn't you say so", when they enter they wonder where the party is only to find that they've been tricked, Blizzard and the others pull up the Petrified Pumpkin Plug and it starts to suck the four ghosts back, Redrum tries to grab Poltergus back but Blizzard grabs and saves him, Poltergus apologizes to the others for pulling pranks on them early. Later, The Director of the EPF contacts Gary the Gadget Guy telling him that he must put the young clever penguin through a EPF test because a bigger threat is coming soon to the island. 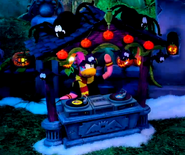 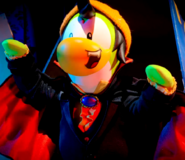 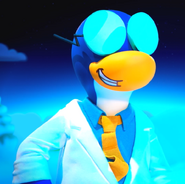 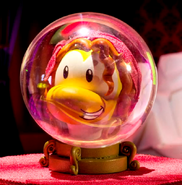 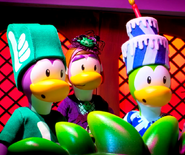 Gary talking with The Director of the EPF

The Petrified Pumpkin Plug as seen in concept art 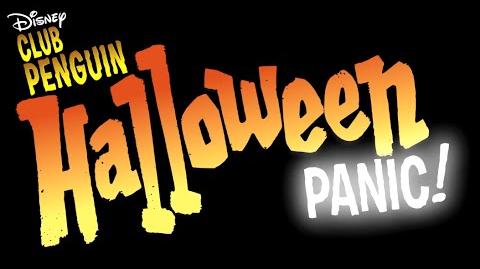 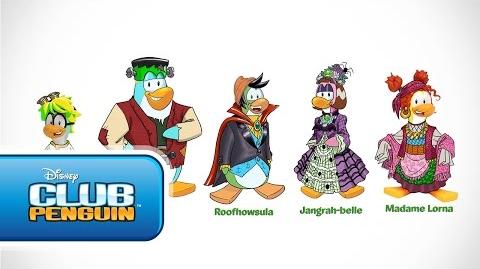