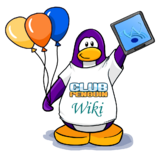 The Club Penguin Wiki aims to create a large database for all there is to know about the popular online game, Club Penguin, and its successor Club Penguin Island. The wiki was founded on December 20, 2006 by V-Rex.

After V-Rex quit the wiki, our wiki was governed by a webmaster system, which meant it was led by two leaders (commonly known as Webmasters). During 2007 - 2009, TurtleShroom and Barkjon were the webmasters. In 2009, TurtleShroom resigned from his position and Barkjon was inactive. Due to that, two new webmasters were appointed. They were Sharkbate and Hat Pop, but were webmasters for about two months only, as the system wasn't really successful.

After the webmaster system was seen unsuccessful, Tigernose and Seahorse started a campaign to get rid of it, due to many reasons; among them little voice for the common users in the wiki. An official vote was conducted, causing the end of the system. After that, a new democratic system was declared, which meant users had a voice in the community, like voting on new policies and other changes. Seahorse made a new policy system, which provided a summary of the rules and policies of the wiki. Admins were given their rules via the policy (votes and all) rightfully, rather than seen as a ruler. This caused the wiki to become more stable and the number of edits increased a lot. After votes, that part of the community finally moved off Wikia fully.

In 2010, Wikia decided to change the skin rolling out a skin called "Oasis". This skin was disliked by many users in the wiki, claiming it was limited and was mandatory. This caused the old community to move to another independent wiki.

During 2011, the editors in the wiki decreased due to some moving to the new wiki. As a result, many vandals made their move and vandalism was sometimes not reverted due to admins not being present. Soon after that, a user named ShrimpPin was given admin and bureaucrat rights by Wikia staff. He promoted admins such as Bman2007Jazz, Awesome335, and The Plush. They started cleaning up again, along with bringing some activities back to normal. Although many pages were cleaned, these admins didn't continue fully, as most left to other wikis and some quit. This made it a hard job for the rollbacks who were present, as no admin would help them out. The wiki went through two months with few users editing, while no admins were present. In November, one of the inactive admins returned, promoting two admins to admin in order to help him, PenguinStorm300 and Wolf-gangs. They also promoted some other admins; among them, Happy65 and Penguin-Pal. They brought back many activities which were successful that time, along with cleaning up around half of the wiki. During December, the wiki became full of editors and became much more active. Mixer2301 was promoted to admin in December and was then demoted in the same month.

By January of 2012, the wiki was cleaned up and rebuilt, but still lacked information. Various new users joined, made their mark, and made this wiki better. Penguinstorm300 was demoted due to inactivity and users Mixer2301 and Dps04 were promoted to admin in February and March respectively. The wiki improved day by day, but had quite a lot of problems in the chat, for example. A new user group called "patroller" was installed and three users were promoted. In mid-2012, a treaty was proposed between the both wikis, which resulted in a fight, but was later resolved. In late 2012, the wiki faced various problems like sockpuppet issues, but was put to an end in December. Bureaucrat Happy65 quit followed by ShrimpPin, which resulted in Shurow, Apj26 and Hey.youcp being promoted to administrator. By December, the wiki improved and returned to how it was before 2010.

By 2014, the wiki had grown with an average of around half a million page views per week and many good editors. On February 8, Kallie Jo was promoted to an administrator. On February 22, Mixer2301 was demoted due to a community vote and inactivity. Later in the year, page views decreased to an average of around 350 thousand views per week, likely due to the decrease in popularity of Club Penguin as well as people returning to school. On August 8, Ocean6100 was demoted due to inactivity. In order to find a new admin, a community vote was held. The vote ended in a close match between Jeserator and Awesome335. As a result, both were promoted to administrators. Later that month, on September 20, Shurow resigned from his position as a bureaucrat. Near the end of the year, on December 6, Awesome335 was promoted to a bureaucrat again as a result of a community vote. Finally, the year ended in a surprise with bureaucrat Penguin-Pal resigning from all his rights on December 31.

2015 began with mass promotions sparked by Penguin-Pal's resignation and settlement as an interface editor. As a result of the community vote, on January 17, the wiki gained two administrators: Vicyorus, a former admin, and Watatsuki, a new admin. In addition, Hey.youcp was promoted to a bureaucrat after a close vote with Roger6881. A few days following the end of the vote, on January 20, Wolf-gangs resigned from his position as administrator, while retaining his bureaucrat rights to prevent any further instability in the wiki. Later, on January 30, Kallie Jo was demoted due to inactivity, and on February 4, Roger6881 resigned. Page views were at an average of around 200 thousand views per week. On March 12, Wolf-gangs resigned from his position as bureaucrat, and on March 27, Awesome335 was demoted due to inactivity. To compensate for the past few demotions and resignations, a community vote was held for one new admin and two new bureaucrats. On April 12, Callum Fawsitt was promoted to administrator, Apj26 was promoted to bureaucrat, and Shurow, a former bureaucrat, was promoted to bureaucrat again. Page views also picked back up to around 250 thousand views per week. Despite various sockpuppet issues, the wiki remained stable throughout the rest of the year.

Near the beginning of 2016, after the end of the holiday season, page views decreased to around 200 thousand views per week again. There were not many noteworthy events on the wiki in 2016, and the administration stayed the same for most of the year. However, on August 8, Callum Fawsitt was demoted after his account was surprisingly globally blocked by Wikia staff for uploading copyrighted material on a different wiki. Over a month later, on September 12, CPW Community Admin was promoted to administrator after a decision was reached by the administration. Page views were at around 100 thousand views per week; the lowest they had been since approximately 2007. On December 20, the wiki celebrated 10 years since the start of its amazing journey in 2006. Despite dwindling user activity throughout the year as well as previous years, there was still hope that activity levels would rise once Club Penguin Island, the successor of Club Penguin, released worldwide in early 2017.

On January 30, it was announced that Club Penguin would be discontinued on March 29 after 11+ years of operation. As a result of the game's shocking announcement, page views skyrocketed to around 445 thousand in the following week; the highest they had been since 2014. On March 16, Shurow resigned from his position as bureaucrat, and was later demoted from administrator on March 30 due to a community vote. On March 29, Club Penguin Island launched worldwide, and on the following day, Club Penguin was discontinued at 12 AM Pacific Standard Time. As a result of the new game's worldwide release and the classic game's closure, page views peaked at 460 thousand in the following week. Fortunately, the wiki was well-prepared with information on Club Penguin Island thanks to editors who worked on articles in the months prior to worldwide release. However, many articles related to Club Penguin needed to be updated to past tense; an effort that would likely take months. A few weeks later, a community vote was held for one new admin and one new bureaucrat. On April 23, CustardBird was promoted to administrator and CPW Community Admin was promoted to bureaucrat after a close vote with Jeserator. On August 9, Vicyorus retired and left the wiki following an unfavourable vote on the Demotion Project. After another unfavourable vote on the Demotion Project, CPW Community Admin lost all his rights on September 27. The year ended with CustardBird resigning from all his rights on December 31, bringing the total number of administrators down to 5.