For the room from Club Penguin, see Cove.

Coconut Cove is a zone in Club Penguin Island. It is a large beach by the sea, surrounded by cliffs. The cove houses various ancient ruins nearby, and many palm trees, some of which bear coconuts. Nearby, there is an active volcano.

Coconut Cove was one of the original three zones in Club Penguin Island. In the 1.5.0 update, the path of the lazy river changed. Originally, after passing by the floating deck, it would continue past the ruins in the east, and end in the southeast corner of the zone, by a wall of rocks in the water. Since the update, it now wraps around the floating deck and airbag, creating a loop.

The sandy shore comprises the northern half of Coconut Cove. In the center of the shore, there is an arch with a path leading to the Beacon Boardwalk. On the left side of the shore, there is a band stage outfitted with many speakers, where members can play instruments, and a lifeguard station, with a small lighthouse. Past the station is a hill leading to the waterfall.

On the right side of the shore, there is a short grassy ledge with a shark teeth arch, and the SS Convenience shop, as well as a campfire with logs and an ancient mural depicting penguins around a beta hat. In the distance behind the ledge, the cove's volcano is visible. Next to the campfire there is a rocky structure with wreckage of a pirate ship protruding from it, which serves as the entrance to the Sea Caves. Past the entrance there are ancient ruins.

In the northwest corner of the area, there is a waterfall originating from a small cave in the side of a cliff. It flows down into a river that leads into the nearby sea. There are some small rocks protruding out of the cliff that allow players to jump into the small cave. There is also a deck chair and umbrella by the waterfall.

The lower half of the zone is occupied mostly by the sea. A lazy river flows through much of the water, originating from the waterfall. While on the lazy river, currents slowly push players through the water. In the southwest part of the water, there is a small oval shaped island, with a few beach chairs and a buoy numbered 2.

In the middle of the water, there is another small island that houses a large airbag that can be bounced on, as well as sandcastle shaped like an igloo that can be destroyed by standing on it, although it reappears after a few seconds. Near this small island is a floating deck with beach towels that can be accessed by the zipline near the ruins, or can be jumped to from the small island.

In the northeast corner of the area, there are ancient Penglantian ruins, which protrude out east of the cove, near the Sea Cave's entrance. The ruins are comprised of columns and arches with the Penglantian symbol, a swirl shape. There are stairs made of stone, with a zipline at the top, which can be used to access the floating deck in the water.

During the final adventure of Rockhopper, "A Captain's Share", the player must visit a larger part of the Penglantian ruins with Rockhopper to find an ancient treasure. The ruins rise out of the sea, after being activated by inserting a black pearl into the gateway near the zipline, to form a long walkway made of rock. At the end of the path, there is a large purple gem, which is actually the prison of the ghost of Shellbeard the pirate. After Shellbeard is defeated, and Rockhopper claims the Bottle of Winds, an ancient treasure, the ruins sink into the sea and cannot be accessed again unless the adventure is replayed.

The water in the center

The SS Convenience from November 29, 2017
Add a photo to this gallery 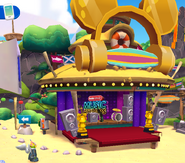 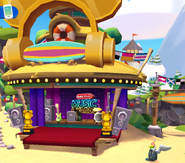 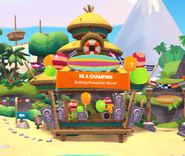 Bullying Prevention Month
Add a photo to this gallery 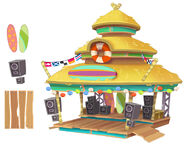 Retrieved from "https://clubpenguin.fandom.com/wiki/Coconut_Cove?oldid=1891972"
Community content is available under CC-BY-SA unless otherwise noted.