Club Penguin Wiki
Register
Don't have an account?
Sign In
Advertisement
in: Miscellaneous, Coins for Change, Christmas Party 2007,
and 10 more

Coins for Change was an annual virtual charity that allowed penguins to donate their virtually earned coins to various booths and stands placed in-game on Club Penguin and Club Penguin Island during December. Real money was then given to charities because of the virtual contribution.

Starting December 14, Club Penguin officially decided to donate one million of their actual money earned from the purchase from Disney to various charities. They set up two locations on the island where you could donate your virtual coins for different causes. The three causes were to help children in need from around the world, help the sick who can not afford medical treatment, or the environment. Although all three causes received funds, the one with the most donated virtual coins received the most real world money. It was Kids Health. There were stands at 2 locations; one at the Plaza and one at the Beach. Upon donating, you would receive the Coins For Change Card, which was only available during the 2007 campaign.

The official announcement of Coins for Change can be viewed here.

There were cross-promotions aired on Disney Channel, before and during the event.

There were three charitable organizations that shared the $1 million donation, namely:

2.5 million penguins donated and 2 billion coins were donated all together. The event ended on Christmas Eve.

On November 10, Club Penguin officially announced that Coins for Change would be back on December 12, 2008. It ended on December 22, 2008. A donation bucket was added in the Captain's Quarters. Club Penguin also made a new page that you could access by clicking the Coins For Change stand and bucket on the home page. You can view it here.

There were three new charitable organizations that would share the $1 million donation:

3 billion coins were donated all together, and a total of 1.5 million USD was donated to the charitable organizations.

Coins for Change 2009 occurred during the Holiday Party 2009 from December 18–29, 2009. It was already a great success even on its first day. Members were able to buy a Coins For Change Donation Station for their igloo and all players were able to get a free Coins for Change Background from Rockhopper. This year, over 4 billion virtual coins were donated by more than 2.9 million players. You can view it here.

Also there was a benefit concert called "Concert for Change".

Coins for Change 2010 was a success. It occurred from December 16–27, 2010 during the Holiday Party 2010. There were 2 stamps you could earn for donating which were the Volunteer stamp and the Top Volunteer stamp. You could get them by donating, but you had to donate 5000 coins for the Top Volunteer stamp. There were tubes Rockhopper brought everywhere that transported the coins into the Lighthouse. Every few days, more and more coins would fill up the Lighthouse and Beacon. There were items you could buy in Rockhopper's Rare Items that related to the categories. The results were announced on January 4, 2011. You can view it here.

The Coins For Change 2011 happened from December 15–29 during the Holiday Party 2011. Disney announced that they would double the coins, which they did. You could donate to get the CFC 2011 Pin or up to 10 thousand coins to get the Epic Volunteer Stamp. You can view it here.

The Coins for Change 2012 went on along with Holiday Party 2012 from December 20, 2012 to January 4, 2013. You were able to buy cookies at the Bakery to fund raise for Coins for Change and get the CFC 2012 Pin. There was a Coin Counter at the Snow Forts. The Lighthouse was not filled with coins anymore. There was a glitch with this Coins For Change, as if you clicked on a Coins For Change-stand in an igloo when this year's Coins For Change ended, the donate coins screen would actually appear after the event has officially ended. This was soon fixed. You can view it here.

The Coins for Change 2013 started on December 19 and ended on January 1. Different from the previous years, you could not choose which category you wanted to donate the coins. On December 12, 2013, Captain Rockhopper was spotted through the Telescope from the Beacon with some train tracks which were being used for December 19, 2013 (Holiday Party 2013). During the Holiday Party 2013, members could own 4 different types of trains and invite penguins to a ride. Member penguins could also go through the Blue Line, Red Line or the Green Line and to throw snowballs to the floating objects to earn coins which were also being used for Coins For Change. All penguins could also earn items by donating to Coins For Change as well as the 2013 CFC donation pin by donating into the normal Coins For Change buckets. Through donation amounts, Club Penguin has donated USD 1 Million to each to help the following organizations to do the following things all around the world. 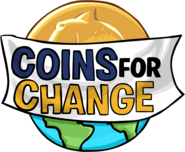 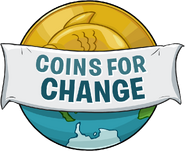 As seen at the Christmas Party 2007

As seen at the Merry Walrus Party 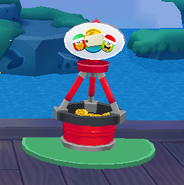 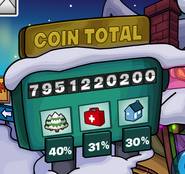 The old Coins for Change button on the ClubPenguin.com homepage 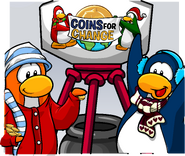 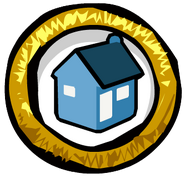 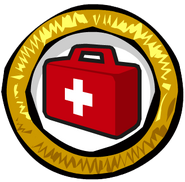 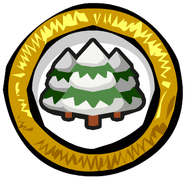 All three penguins together 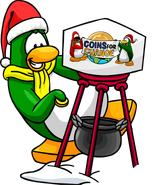 A penguin donating for Coins for Change