Players have a variety of colors from which they can choose for their penguins. When creating an account, the player is asked by Aunt Arctic to pick one from 16 options. The color of the penguin can by changed in-game by the player for free by clicking the "My penguin" button, the "My Profile" button, and then selecting the "Color" tab. A membership is not required to do this.

The list of colors available in Club Penguin Island

One of the color poll options

One of the color poll options

Were you looking for Portal:Color?

Players had a variety of colors from which they could choose for their penguins. When creating an account, the player was asked to pick one from 15 options for free. Further colors could later be bought from the Penguin Style catalog in the Clothes Shop for 20 coins each. A membership was not required for buying new colors.

Colors are essentially clothing items. However, they couldn't be removed from the player card, and the player was only able to change colors. In the inventory, color icons were represented as colored blobs with eyes.

The colors were as follows, going respectively with the picture:

The first colors to be added after the release of Club Penguin were picked in color votes, where players picked a color from a small variety.

The first color vote was held in 2006, where Lime Green and Lavender were nominated. Lime Green won, and as a result the Lime Green Party was held.

A second vote was held in 2009, where the nominated colors were Aqua, Maroon, and- once again- Lavender. The winning color was Aqua.

In addition, Arctic White was released in 2012 without a vote, and was initially given for free during the Holiday Party.

Aqua
Add a photo to this gallery

Dot Lavender
Add a photo to this gallery

Light Purple
Add a photo to this gallery

The old penguin for the colors page

The June 2008 penguin for the colors page 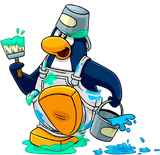 The August 2009 penguin for the colors page