Comoica's Jet Pack Adventure is one of the winners of the Book Room Writing Contest 2007.

It is about a penguin called Comoica, who sees Rockhopper's ship through the telescope. She decides to go to the ship to meet the pirate.

It was a beautiful day in Club Penguin. The sun was shining, and a breeze was blowing. It was a perfect day to strap on a Jet Pack and fly.

Comoica said goodbye to her puffles, locked the door, and headed for the Beacon. She love the fresh air and the smell of salt from the sea.

Before she took off she looked out the telescope. "It's the Migrator! Rockhopper's coming!" she shouted with delight.

Suddenly, a great idea came to her. When she started to fly, Comoica didn't go east, the way she usually did, but west instead. She flew straight over the Beacon toward the ship!

She sang as she flew. "I'm flying over the seven seas, to meet Rockhopper and Yarr, on a Jet Pack soaring with the breeze, and I want a candy bar." She giggled to herself. She had never been good at making up songs, especially ones that rhymed.

After 15 minutes or so, she realized some problems with her plan.

First, the ship was further away then it seemed. Second, she was going against the wind; it slowed her down and blew her off track. Last but certainly not least, there weren't any fuel tanks on this route.

She could already see the flashing red light indicating her fuel was very low. The Jet Pack would be empty in 10, 9, 8, 7....She fell for a moment and then put on an extra tank.

The Beacon seemed far away, but the boat was further. "Maybe I should turn back," she thought.

Suddenly, the deepest, loudest and scariest, yet most beautiful sound she had ever heard echoed all around her. She looked at the water. There was nothing there.

Puzzled, she flew a little lower. "Who's there?" Comoica asked, her voice trembling a little.

She was afraid to get close to the water. Whatever made the sound could be dangerous.

Then she heard it again. It was softer this time, but much deeper. "What in the world was down there?" she wondered.

Finally, curiosity got the better of her. She was about to touch the water when a huge shape leaped up at her.

She screamed and shot up. It looked like a whale to her.

Comoica got close to look at its mouth, and there weren't any teeth. She sighed with relief.

"It's only a Baleen whale. It won't hurt me," she said and she continued on her way.

By now the ocean winds had picked up, and it was very hard to fly. Comoica was tossed in loops and thrown up and down again.

Imagine being in a sled, racing down Ridge Run at top speed and not being able to control your speed, multiply that by about twenty, and you get some idea of what Comoica was doing.

On top of it all, her fuel was getting low again. She turned it off. It wasn't helping her get anywhere anyway.

Right then, she spotted The Migrator and it was much closer. Before she knew it, the ship was right under her flippers. The only problem was landing.

Yarr appeared and bounced up the sails. He hardly seemed to mind the wind at all. He gave Comoica a grin and a little jump as if to say, "Ahoy there, matey! Welcome aboard the Migrator!"

Comoica laughed and grabbed onto one of the masts. The bright red puffle led her down.

When she reached the deck Rockhopper greeted her, "Ahoy, what brings ye here?"

She told him the whole story.

"Argh ye be a fast traveler," he said. "I won't be pullin' into port at Club Penguin till the day after tomorrow. Are your Jet Packs all out of fuel?" he asked.

"Almost. Do you have any extra fuel?" she asked.

Unfortunately she was out of luck. But Rockhopper's alternative delighted her. "Ye just have to sail back with me."

In her excitement she suddenly grew concerned. "What about my puffles? They could starve!"

"I can take care of that," said Rockhopper with a wink. "YARR!" he bellowed.

A half hour later she spotted her puffles approaching the ship. The black one was in its fire ball, the green one had it is propeller hat on, the purple one was floating in a HUGE bubble, the pink one was waving its jump rope around its head so fast it was like a propeller, and the red puffle had its helmet on. Comoica guessed he had cannonballed all the way. The little blue puffle was on its ball floating on the waves. The green puffle swooped down and picked it up, and they all arrived on deck.

Comoica introduced each one of them to Rockhopper. They bounced over to Yarr, who started to teach them how to climb masts.

Comoica has never forgotten her wildest Jet Pack Adventure and how she met Rockhopper. 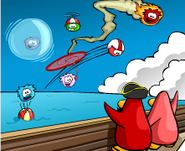 Retrieved from "https://clubpenguin.fandom.com/wiki/Comoica%27s_Jet_Pack_Adventure?oldid=1845611"
Community content is available under CC-BY-SA unless otherwise noted.