The Cove was a secluded bay in Club Penguin located on the southeast shore of the Club Penguin Island, near the Forest. Due to being in close proximity to the ocean, it was a popular spot for surfing and swimming. The surf shack was a spot for penguins to lounge and get ready to play Catchin' Waves. Like the Beacon which had a Telescope, the Cove had Binoculars which you could use in order to look at the sea.

The original design was rather spacious, with being similar to the current design, with overall less decoration. There was no medical station, and the Surf Shack was much smaller, and was simply a small hut, and had surfboards propped against it.

The last design was similar to that of the Cove at the Teen Beach Movie Summer Jam. Lampposts were added bordering the stairs, and a medical station was constructed by the lifeguard chair. The Surf Shack was expanded, and instead of being a small hut, it was transformed into a building resembling a real-life surf shack.

The Cove was not initially known to penguins. One day, a penguin was playing Jet Pack Adventure and miscalculated his landing. He ended up in an uncharted wilderness and heard the sound of the ocean. Approaching the area, he discovered an uninhabited shore, and made a sketch of its features and location. His friend located him and they explored the beach. Unfortunately, on their way back, the map was blown out of the penguin's grasp. The map was lost, but was later found, and the Cove was discovered by the public.

After a few days, a staircase was built that allowed penguins to reach the shore. A party was held, known as the Cove Opening Party to celebrate. A week later, the Surf Shack was built here.

On March 27, 2009, a Game Upgrades was added to the Cove, allowing for players to buy surfboards. On September 5, 2013, the room was renovated as part of The Journey.

Before the Surf Shack was finished

After the Green Duck was added

After completion of Operation: Hot Sauce

The Cove as seen on the map 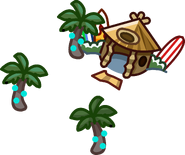 The Cove as seen during the Holiday Party 2013 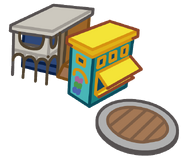 The Cove as seen during the Muppets World Tour 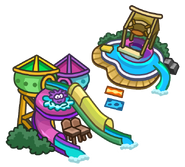 The Cove as seen during the Penguin Cup 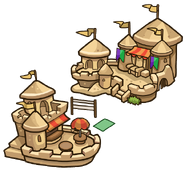 The Cove as seen during the Frozen Party

The Cove as seen during the Halloween Party 2014 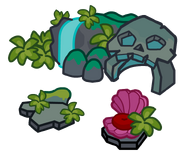 The Cove as seen during the Pirate Party 2014

The Cove as seen during the Star Wars Rebels Takeover

A penguin sitting by the campfire 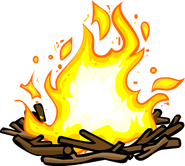