Not to be confused with Underground Opening Party.

The Cove Opening Party was a members-only party held in celebration of the opening of the Cove. It was held from May 25 to May 29, 2007.

The Cove Opening Party took place at the Forest, Plaza and Cove. The Forest featured a box of Lifeguard Whistles that were free to everyone, a small stand that said "juice" on it that had a variety of items on the stand — such as a blender with a purple liquid inside and a cash register — and lastly, a large sign of a penguin pointing to the Cove and saying "The Cove is down the stairs!". At the Cove there was a turn table, speakers, a box of records, cyan colored ribbons draped across several surrounding pine trees, a large banner that read "Member Party", and a box that contained life rings that were a wearable item. The three logs, camp fire, and lifeguard chair stayed after the party was over. At the Plaza, there was a sign pointing to the Forest that read "Member Party".

An advertisement in The Penguin Times about the party 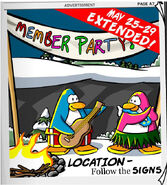 Another advertisement in The Penguin Times about the party