Club Penguin Wiki
Register
Don't have an account?
Sign In
Advertisement
in: Miscellaneous, Machines, Gary the Gadget Guy,
and 5 more

The Crab Translator 3000 was one of G's inventions, before it was destroyed. It was only used in Mission 6 to translate what Klutzy was saying. Unfortunately, Klutzy destroyed the machine by ramming the side of the cage, multiplying the noise till the machine overloaded, causing the machine to explode and destroying the cage that held Klutzy, allowing him to escape. After he escapes, you must chase Klutzy to the mountain where he eventually jumps off going to Wilderness, and back to his partner, Herbert. 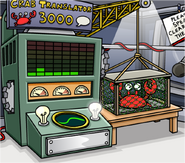 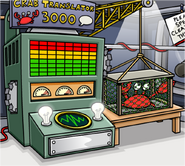 The Crab Translator 3000 when overheating

The Crab Translator 3000 after it explodes