It was featured in the short Puffle Trouble, where Herbert was finalizing the device and its detonator, intending it to be used to stop penguins from throwing parties. However, it was activated by a White Puffle, and as a result, the lab was covered with Cream Soda, foiling Herbert's intentions. 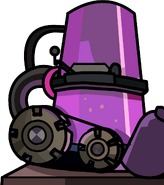 Retrieved from "https://clubpenguin.fandom.com/wiki/Cream_Soda_Sticky_Bomb_of_Doom?oldid=1823756"
Community content is available under CC-BY-SA unless otherwise noted.