The Crow's Nest was the highest point on The Migrator, and served as a lookout point for Rockhopper and Yarr, as well as a host for the Snow Cannon 3000, which was the main means of defense for the ship. Yarr could often be seen here when the Migrator was docked.

The Crow's Nest was quite sparse, and contained simply the Snow Cannon 3000, some ammunition, and a large jolly roger flag in the center. There was a railing surrounded the entirety of the Crow's Nest, and there were shrouds which served as a ladder of sorts, between the nest and deck.

While the Crow's Nest always existed since the Migrator was first built by Rockhopper, the room itself was not accessible until after the end of Rockhopper's Arrival Party.

The Crow's nest while Yarr was not visible 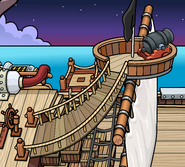 The small scale version of the Crow's Nest from Rockhopper's Quest