DJ3K was a mini-game in Club Penguin. The DJ3K itself was invented by Club Penguin's resident inventor and scientist, Gary the Gadget Guy. DJ3K was a way for penguins to create their own music for their igloo. It also serves as an add-on to the DJ Table in the Night Club. It was released on July 25, 2008, the same time the Music Jam 2008 started. You could bring your Yellow Puffle along in the game and it would dance and earn you more points, earning you more coins.

On July 17, 2014, when the Music Jam 2014 began, DJ3K was closed and replaced by SoundStudio. SoundStudio brought a whole new experience to the game, allowing you to "share your beats in the Dance Club for penguins to like."[2]

This game takes place at the DJ3K table in the Nightclub. You begin recording music by pressing the Record button at the top of the screen. The way to earn coins in this game is to press the buttons, sliders and records on the screen to add beats, rhythms and melodies to your music. The better the music sounds, the more coins you will make. A signal as to how many coins you are making is what your penguin or puffle is doing and the lights in the background. Once you're satisfied with your song, click the Record button on top of the screen to finish the song.

Since June 26, 2009, players could buy records for the DJ3K in Game Upgrades catalog for 75 coins each, allowing more tunes to be used in the game. The three records, Jungle, Funky and Festival, each add different sounds. When Music Jam 2010 started, three more records were added: Reggaetron, Desi-bel, and House Blend. In October 2011, the Monster Muzak record was released as well. 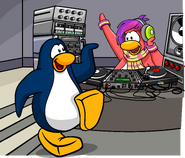 Cadence playing DJ3K as seen in a Stamp Book photograph

The DJ3K booth in the old Night Club

The DJ3K booth in the renovated Night Club

The Night Club before the game launched