The DJ Penguin is a character who appeared in Club Penguin: Elite Penguin Force. He appeared at the Night Club throughout the game, and does not play much role in the story. He is an orange penguin wearing sunglasses and headphones. So far, he has not made an appearance in the online Club Penguin.

During part of the 7th mission in the game, Double Trouble, he assists the player briefly, by heading into the Boiler Room to investigate the stolen Boiler, after a large crash is heard. He notices a hole in the wall leading to the Cave, and remarks something strong must have made the hole. He stays to watch the Boiler Room while the player searches for clues.

The DJ at work 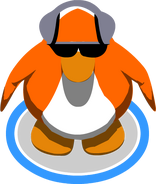