It had an organ that acted as a "key" to the next room: players needed to repeat a few combinations to open the door. After players finished the combinations correctly, the next time they went there, there would be a button which would automatically open the doors and move the rocks, similar to the one that functioned in the Ice Race Cavern. 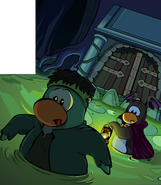