Destructobot was a robot created by Ultimate Proto-Bot 10000. It was meant to destroy the Club Penguin Island during the Marvel Super Hero Takeover 2012. However, it was defeated on the Downtown Showdown by the Super Heroes and the Elite Penguin Force.

A meteor was spotted while a group of knights and princesses were saving the kingdom from the reign of Scorn the Dragon King. It soon crashed into the island a few weeks later, on June 7, 2012, during the Meteor Strike. It did not cause much damage when it hit the Dock, but it did restore power to one very evil robot, the Ultimate Proto-Bot 10000. It sent a message to all Super Villains in the Club Penguin Times, saying that they need to arm their forces.

Super Heroes gathered together teams, and came to save the day. On June 14, 2012, the Downtown Showdown commenced. Super Villains powered the bot, and heroes defeated it. In issue 350 of the Club Penguin Times, it was mentioned that the parts of Destructobot were collected by the Elite Penguin Force. One agent said that they were going to use it as a toaster. 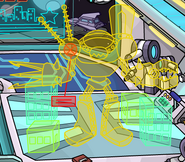 The projection in the Hero HQ 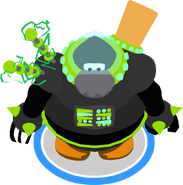 A penguin wearing the Doom Drone

The Doom Drones that resembled it
Add a photo to this gallery
Retrieved from "https://clubpenguin.fandom.com/wiki/Destructobot?oldid=1873563"
Community content is available under CC-BY-SA unless otherwise noted.